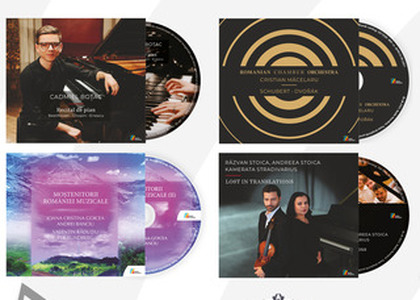 January 15th is the date when Romania celebrates the National Culture Day. It is the day when the Romanian society tries to find and put in a stronger light the authentic national cultural values.

For Casa Radio Publishing House, January 15th is another opportunity to reaffirm the beauty of Romanian cultural values ​​and their ability to strengthen the "immunity" of society and to offer the prospect of a healthy future for future generations.

These attributes of culture are valued at Casa Radio Publishing House in the editorial products and are reflected, perhaps more strongly this time, in four music albums released at the end of 2021 and made in partnership with Radio România Muzical. Four albums that bring together important national musical landmarks - led by George Enescu, but also universal, presented to the public by young Romanian artists, at a particularly high quality altitude:

"Răzvan Stoica, Andreea Stoica, Kamerata Stradivarius - Lost in Translations".
The album presents well known works to the public, which manage to overcome the border, sometimes restrictive, of classical music and to add the virtuosity of the original interpretation of some scores from the universal and Romanian repertoire, otherwise less common together: from Ciprian Porumbescu, to George Enescu and Béla Bartók, to Astor Piazzolla. In an eclectic but well-tempered playlist, violinist Răzvan Stoica and pianist Andreea Stoica, together with the ensemble "Kamerata Stradivarius", founded in 2010, bring back to the stage the sound of the eighteenth century violin, bearing the name of Antonius Stradivarius, a violin which RăzvanStoica won in 2009 at the "Strad Prize" International Competition in Salzburg. Răzvan Stoica, Andreea Stoica and KamerataStradivariusa have toured in over 40 countries and performed on famous international stages such as Concertgebouw (Amsterdam), Gewandhaus (Leipzig), Konzerthaus (Berlin), but also at the Romanian Athenaeum and Radio Concert Hall (Bucharest). The passion and generosity of the members of the Stradivarius Chamber have inspired several projects, created outside the concert halls, in hope of involving artists and especially musicians in the community, as a contribution to a more beautiful and better world.

The album will be released on Radio România Muzical, in the Music box show, on January 10th, at 7 pm, and will be broadcast on January 15th, at the same time.

Currently, a student at the University of Music and Arts in Vienna, Cadmiel Boțac represents with excellence the future of Romanian piano art, through his special maturity, flawless piano technique, sensitivity and originality of his performances. The compact disc is the result of two distinctions awarded to the young artist of Radio România Muzical. The special prize received in 2017, at the "Transylvanian International Piano Competition" in Brașov and the "Musical Romania's Heirs" Scholarship, won in 2020. These offered the young pianist the chance of a special recording session, made on Radio România, in the Concerts Studio and editing of this debut album.

The album will be presented to the public on January 13th at the Radio Hall, on the occasion of the recital given by pianist CadmielBoțac together with cellist Cornelius Zirbo, an event organized by Radio Romania Musical in the series "Musical Romania's Heirs". At the end of the recital, the young pianist, who turns 25 on January 16th, will offer the public an autograph session.

Romanian Chamber Orchestra brings together Romanian artists, internationally renowned, with musicians who are part of the Romanian Youth Orchestra and who are now active in the most important orchestras in the country, along with young instrumentalists studying in higher education institutions in the country . Cristian Măcelaru - principal conductor of the Cologne Radio Symphony Orchestra and Musical Director of the French National Orchestra - is, as always, the guarantee of a memorable performance and gives us, on National Culture Day, an extra confidence and consideration for the new generation of artists Romanians.

The album will be presented on January 15th, National Culture Day, on Radio Romania Music, during the morning show Allegro ... weekend.

"The heirs of musical Romania". The second album in this series contains a double compact disc, with two extraordinary recitals held on the stage of the Radio Hall by young musicians already established internationally: on the one hand, the violinist Ioana Cristina Goicea and the pianist Andrei Banciu (12th of October 2019), and on the other hand, the cellist Valentin Răduțiu, together with the Swedish pianist Per Rundberg (4th of March 2020). These are recordings that truly reflect the level of excellence, confirmed by their inclusion in Radio Romania's Golden Sound Library.

Music lovers will have the opportunity to listen to selections from this album on January 15th, National Culture Day, on Radio Romania Music, during the morning show Allegro ... weekend.

Through the four albums, Casa Radio Publishing House emphasizes - on the occasion of the National Culture Day - the miraculous force of artistic expression to transfigure the human being and thus reaffirms the inspired words of conductor Cristian Măcelaru: Music was and will remain the most direct way we communicate the essence of our feelings.

The albums can be purchased, at the manufacturer's price, from Casa Radio Bookstore or by ordering online on the Casa Radio Publishing House website: www.edituracasaradio.ro. They can also be purchased from distribution partners.