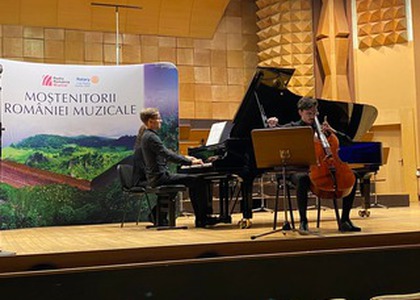 The heirs of musical Romania in a recital in Timisoara

What are your thoughts now?

Very good! Talented young people! I'm really glad they came to us and that through you and the Rotary Club we had the opportunity to listento them in Timisoara. We talked to everyone and we want them to be part of the "Banatul" Philharmonic's programs in the future as well. They deserve to be supported, especially because they are also talented, but also very expressive. For their age, it shows a fairly deep degree of understanding of music; they are mature in terms of understanding and expressing music to the audience. "

"A wonderful evening! I came for Cadmiel and Cornelius - two extraordinary young men. And if we enjoyed the artistic part tonight, the inner part of the two is just as beautiful. And that's probably why they were able to communicate so much with us. Too bad the hall ... we were few ... we support, first of all, by presence and then by other means. Quality, a lot of quality! "- Marius Bâc, Arad

The "Heirs of Musical Romania" project is funded by the Rotary Pipera Club. Răzvan Mironescu, President: "This evening has been a special evening because the Pipera Rotary Club is directing its projects in three directions - culture, education and health - and I believe that this evening all the conditions to have a project in the area have been met. culture and education at the same time, in the sense that we tried to educate through culture tonight, music education of course, starring two exceptional young people, the winners of the " Musical Romania's Heirs " Scholarship, who proved to everyone this evening that we have a an extraordinary perspective for young musicians in Romania.

We have reached the fourth year of collaboration and, after this evening in Timișoara and our second evening away, maybe we should draw some conclusions..

"I would like to draw the conclusions together in ten years if possible, because the only thing I can say after these two wonderful evenings that I spent with the scholarship holders of "Musical Romania's Heirs "- Cadmiel and Cornelius - It is a great satisfaction to see these exceptional young people perform on the Romanian stages, in the Romanian Philharmonics; and the reaction of the public, the warmth of the public both in Cluj and in Timișoara, which, obviously, lives the satisfaction of a young generation of excellence. And I think that for us, the two partners - Radio România Muzical and Rotary Club Pipera, this satisfaction of being able to offer, on the one hand, young people the opportunity to perform for the public in this country this time, but also the satisfaction of the Romanian public, for me it is a great. I hope that this motivation that we live together today, this feeling of pride and joy, will animate us in the future as well.

You listened to Dan Popescu, organizer of the "Musical Romania's Heirs" project, on behalf of Rotary Club Pipera.

Last night, Adrian Luca, governor of Rotary International - Romania-Moldova district, was in the audience in Timișoara: "I am not the one who would have been right ... it is their merit, that they are the vectors and we are always happy when we see that our young people, our children are performing, and music is on our souls. Without art, music, we Rotarians can't survive, just as all of humanity can't. So congratulations to my colleagues. We continue to encourage this kind of activity." , we support them andwe wish them well and all the best in their careers. "