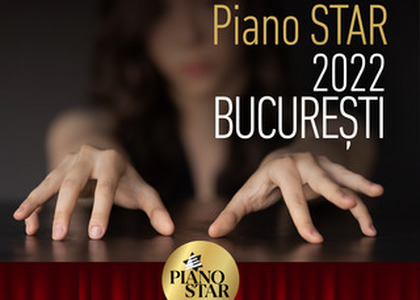 January 18th - 21st - Masterclasses of technical and interpretive improvement given by guest professors from European academies;

The fourth and final module of musical and professional development for the 10 pianists in the PianoSTAR program will take place on January 18th-23rd at ARCUB, Goethe Institute Bucharest and Liszt Institute - Hungarian Cultural Center Bucharest.

10 young and very young pianists from all over the country participate in the Piano Star excellence program, selected by an international jury based on fragments of interpretation and a letter of recommendation from the guiding teachers. The 10 young people are: AndraBăcilă, PetruBurcea, Irisa Filip, Matei Cristian Lăbunț, Mario-Victor Lucaci, Leonid Lupașcu, Teodora-Ioana Mincu, Darius Emanuel Moț, Ștefan Rus and Daria Andreea Vasile.

The Piano STAR program of excellence offers a series of cultural experiences of classical music to both participants and specialized audiences (teachers, musicians, etc.) and the general public.

Thus, in the following week, the Bucharest public is invited every day to attend classes, but also the Piano Star Festival and the Awards Gala, as follows:

The module will end with the STAR Piano Festival, a marathon of repertoires studied throughout the project. The program of the Festival includes three parts - (1) Chopin and Liszt, (2) Studies and Dances, (3) Romanian Music. Works in 4, 6 and 8 hands are also included in the program.

At the STAR Piano Gala, prizes will be awarded to the most appreciated pianists and pianists. These will consist of recitals, scholarships, study visits, recordings and radio broadcasts and will be awarded by an international jury that includes: RăzvanPopovici (Director of the SONORO Festival), Dr. Joachim Umlauf (Director of the Goethe Institut Bucharest), DragoșDimitriu (Director of the Brașov Philharmonic), ES Mister. Arthur Mattli (Ambassador of the Swiss Confederation to Romania) and teachers supporting piano masterclasses: William Fong (Royal Academy of Music in London and Purcell School, Special School of Music for Talented Children), Uta Weyand (Pianale International Academy), Barbara Szczepanska ( Robert Schumann Hochschule), Aaron Shorr(Royal Conservatory of Scotland), Kira Frolu (ARTUAL Association).

The capacity of the halls being reduced to 30%, the presence at these events remains conditioned by the reservation of seats on the e-mail address pianostar@dccom.ro and by the presentation of the green certificate at the entrance.

"We want this initiative to accelerate artists or marathons of artistic development not only to shape a path for the artistic manifestation of the musical educational act - but to explore and respond, together with prestigious personalities and young pianists gifted in the program, to Questions such as: What role can music culture play and a pianist's performance in his future career? Are there practical ways to shape a successful future? etc. - says Kira Frolu, pianist, president of the Artual Association.

The first edition of the Piano STAR program takes place between July 2021 - January 2022. The first module took place in Brașov in August, at the Multicultural Center of Transilvania University and Tudor Ciortea Music High School, and the next three in Bucharest, in September, November and January. The program also included recitals by Kira Frolu (at the Goethe Institute in Bucharest and Arcub) and Florian Mitrea (at the Romanian Youth Arts Center), as well as a round table on artistic education and the cultural scene. Simultaneously with the performance sessions, the students also participated in practical communication workshops under the direct guidance of specialists, in order to improve their skills to present themselves to the public both on stage and in online environments and to acquire practical notions of organizing cultural events. The guiding teachers of the participants were also part of the internship exchange program with the project team.

The Piano STAR project is organized by the Artual Association, in collaboration with DC Communication, with the support of the Capital City Hall through ARCUB, IPP - Instore Power Provider and Aqua Carpatica.