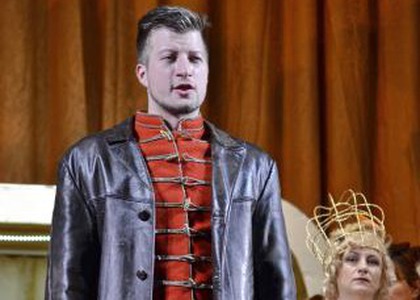 Briefly, the theme of the play "Háry János"follows an incredible series of heroic events that took place during the military service of an old hungarian peasant. However, there are much more meaningful events happening. English music historian, Edward J. Dent admits this fact, when, after a decade from the play's premiere (October 6th, 1926, Budapest), he writes that Háry is an enigma, one that is easy to recognize but hard to decypher. Humor, satire and subliminal messages, altogether in one place.

The fact that Kodály's stage works do not fall exactly into the category of opera is explained by the choice of their subject. The authentic peasant characters presented on the composer's stage can speak only through their specific voice, namely that of the folk song. And with its short, solid and round form, the folk song is a completed piece of music. So it can only be a libretto, a text that can support, or rather ask for such musical forms. This piece therefore does not need formal solutions of the work. Although he knows the technique of musical discourse, Kodály does not need it, so he does not use it on stage. He does not attach himself to a particular genre, but seeks the right form for his message. The booklet "Háry" turned out to be exactly this form.

With the participation of the choir, orchestra and ballet ensemble of the Hungarian Opera

Tickets for the show are available online on eventbook.ro and at the ticket office of the institution from Monday to Friday between 10 am and 2 pm. The cashier's office opens two hours before the shows.

We respectfully inform you that, due to the value of the incidence of SARS-COV-19, participation in the events of the Hungarian Opera in Cluj is allowed only with a certificate of immunity. The certificates can be downloaded from the website https://certificat-covid.gov.ro .

Thank you for understanding!