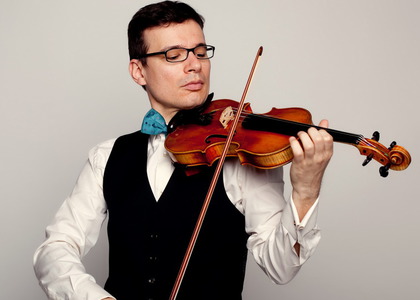 Wednesday, the 2nd of February 2022 (starting with 7 PM), ALEXANDRU TOMESCU, one of the most appreciated Romanian violinists, will perform, using the famous Stradivarius Elder-Voicuheritage violin, one of MOZART's pieces:Violin Concerto No. 5. Created in 1775, the work premiered that same year, in Salzburg, during the winter holidays. The event, held by the Romanian Radio Chamber Orchestra at Sala Radio, will unfold under the baton of RADU POPA, permanent conductor of the "Banatul" Philharmonic - Timișoara.

The night will begin with Sinfonia for Winds in G minor, a work of the well-known Italian opera composer GAETANO DONIZETTI, and will end with DVOŘÁK - Serenade in E major for string orchestra.

Graduating from the National University of Music in Bucharest, RADU POPA went on to study in Vienna, at Hochschule für Musik. He grew up under Erich Bergel's guidance, the world-renowned Romanian conductor who was a brilliant student of Herbert von Karajan.

Radu Popa's career takes place between the important concert podiums of Romania (Ateneul Român, Sala Radio) and tours abroad. He received applauses on the podium of the Giuseppe Sinoppoli Hall of the famous Auditorium in Rome (accompanied by the National Radio Orchestra - 2009) and at the stand of the Janacek Philharmonic Orchestras in Ostrava - the Czech Republic, Transylvania - Cluj-Napoca, Banat - Timisoara, etc. Paris, Basel, Baden-Baden, Mannheim, Gothenburg, Lviv are among the destinations where the artist has concerts.

After the composer Osvaldo Golijov was awarded the Grammy Award, the famous record label Deutsche Grammophon - Sonyclassics.com released on CD the soundtrack of the film Youth without youth - directed by Francis Ford Copolla. The soundtrack was performed by the Bucharest Metropolitan Orchestra, led by Radu Popa.

ALEXANDRU TOMESCUis a concert soloist of the Romanian Radio National Orchestra since 2002. He went to the USA and Switzerland on scholarships. Among the many national and international competitions he won, there are: the "Paganini Competition" (Genoa, 1995), the "Marguerite Long-Jacques Thibaud Competition" (Paris, 1999) and the "George Enescu Competition" (1999).

He performed under the baton of important conductors, including Kurt Masur and Valery Gergiev, Vasilii Petrenko, along pianists like Valentina Lisitsa and Eduard Kunz, in famous venues such as the Berlin Philharmonic, Carnegie Hall, Concertgebouw, Théâtre des Champs-Élysées.

In November 2018, following the national contest, Alexandru Tomescu won, for the third time, the right to play the Stradivarius Elder-Voicu violin for the next 5 years, until 2023. The violin was used for four decades by the great violinist Ion Voicu, The Stradivarius International Tour is one of his successful projects, with hundreds of concerts, in dozens of places, both in our country and abroad, with programs that included several integral-events for the Romanian musical life.

The concert will be broadcasted live on all Radio România Cultural and Radio România Muzical frequencies and streamed live on the Internet, on the websites of the two stations.

Access inside Sala Radio will be allowed only under the condition of compliance with the legal regulations in force. Tickets are available online at iabilet.ro They can also be bought in Flanco stores, Rompetrol gas stations, Unirii 1 Metro Station, "Muzica" stores, IQ BOX, Uman and the Selfpay terminals. You can pay online by credit card, via Paypal, Sodexo cultural ticket cards, on Vodafone or Orange invoice, or by cash on delivery through Fan Courier, anywhere in the country.