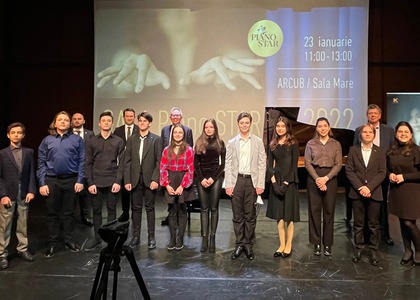 Piano STAR - The program of excellence for young pianists in the pre-university segment organized on Saturday, January 22nd, 2022, the Piano STAR Festival, a marathon of repertoires studied throughout the project, after 4 modules of technical and interpretive improvement, supported by piano teachers from major academies music in Europe.

The awards for the most appreciated pianists and pianists were given at the STAR Piano Gala, which took place on Sunday, January 23rd, in the Great Hall of Arcub, as follows:

"They all benefited from the direct experience of training and interacting with some of the most important piano teachers in Europe, as well as the recitals in the concert hall. I was impressed by the difficult repertoires approached and the way they prepared. and the young pianists performed at the Festival "- says Kira Frolu, pianist, president of the Artual Association.

"The Piano Star Festival was probably the most difficult and intense test of the project, in many ways, a marathon that tested the limits of young pianists in real conditions of artistic life. There was no boring moment, everything passed very quickly. it was great to see how they incorporated and understood all the ideas from the classes and processed them in the festival under the pressure of the event, but also under the emphasis of their personality, already defined with the guiding teachers. All our pianists are very talented, intelligent, passionate and this is what we felt with every hour of preparation and recital. Their participation, their commitment as artists in the Piano STAR season took into account not only these qualities, but also the ability shown in the Festival, of endurance, power to shine and conquer the audience "- said William FONG, Music Director of the project, professor at The Royal Academy of Music and head of the piano department at Purcell School in London, the special school of music for talented children.

The Piano STAR program of excellence offered a series of cultural experiences of classical music to both participants and specialized audiences (teachers, musicians, etc.) and the general public :

- Collective classes - techniques for organizing the study, listening to and analyzing music, building repertoire, collaborative music development. The guiding teachers of the participants were also part of the internship exchange program with the project team.

- Cultural dialogues. They brought the project partners and teachers for discussions on the links between art education and the cultural scene from the Romanian, German and British perspective.

- Communication workshops. To improve their ability to present themselves to the public both on stage and in online environments and to acquire practical notions of organizing cultural events.

"We wanted, through this initiative accelerator of artists or marathon of artistic development, not only to outline a path for the artistic manifestation of the musical educational act - but to explore and answer questions such as: What role can music culture play and the performance of a pianist in his future career? Are there practical methods for shaping a successful future? etc. " - says Kira Frolu, pianist, president of the Artual Association.

The Piano STAR project is organized by the Artual Association, in collaboration with DC Communication, with the support of the Capital City Hall through ARCUB, IPP - Instore Power Provider and Aqua Carpatica.