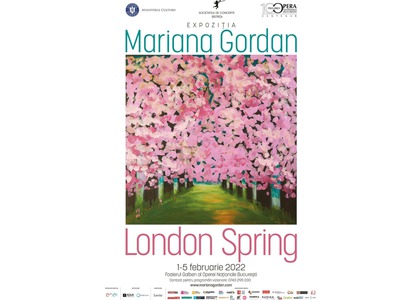 Romanian National Opera hosts from February 1st until February 6th, 2022 the exhibition "London Spring" by Mariana Gordan, plastic multi-media artist (painting, sculpture, film), based in London from the age of 19, in a short but intense artistic tour in Romania.

The opening of the exhibition will take place on Tuesday, February 1st, at 6 pm, in the Yellow Foyer of the Romanian National Opera, Bucharest, in the presence of the artist, who will present 10 works inspired by the celebration of the Centenary of the Romanian National Opera. The opening will be hosted by Gavrilă Țărmure, the representative of the Bistrița Concert Society Foundation. Those present at the event will have a musical surprise performed by cellists Răzvan Suma and Ela Bokor.

Access to the exhibition is provided at the shows in the repertoire or during guided tours. To schedule a guided tour, it is necessary to send an email to bilete@operanb.ro.

Throughout her career, Mariana Gordan produced the mosaic for three London Underground stations: Tottenham Court Road, Oxford Circus and Finsbury Park (designed by London Transport 1985), made two bas-relief panels for the façade of the British Telecom building, West India Dock Road, was a finalist in the Clement Attlee sculpture portrait competition at the Royal Academy and was the protagonist of a major solo exhibition in Venice in 2007, entitled "Portrait of a Street", with over 100 pastel portraits and 60 sculptures and portraits of children.

The event is organized in partnership with the Bistrița Concert Society Foundation.