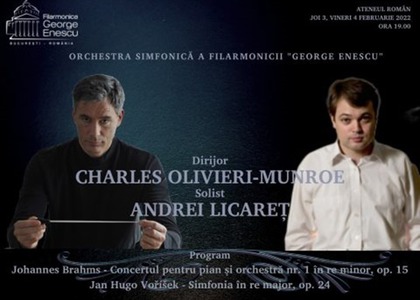 The canadian conductor, Charles Olivieri-Munroe, and the pianist, Andrei Licareț are returning to Romanian Athenaeum’s stage.

Thursday 3rd and Friday 4th of February 2022, The "George Enescu"Philharmonic Symphony Orchestra will have Canadian conductorCharles Olivieri-Munroe as a guest at this season's concerts. The concerts' program held beginning with 7:00 p.m., in the Great Hall of the Romanian Athenaeum, will include "Piano and OrchestraConcerto no. 1 in D Minor Op. 15" by Johannes Brahms, with the pianist Andrei Licareț as soloist and "Symphony in D Major" by Jan Hugo Vorisek.

The Czech composer Jan Hugo Voříšek (1791-1825) composed his only symphony, the one in D major, in 1821, in a style similar to Beethoven's first two symphonies. However, the early romantic language, melodically original, is similar to Schubert's. At the "George Enescu" Philharmonic, the performance of a work by Vorisek is indeed a premiere.

"Piano and OrchestraConcerto no. 1 in D Minor Op. 15" by Johannes Brahms had its debut on 27th of January 1859 at Gewandhaus-Leipzig. "It is one of those pieces that, once discovered, will stay on your mind your whole life. Through its force and expressiveness, through the musical's discourse greatness of construction, so as through its beauty, this concerts represents one of the highest and most important aspects of the concert repertoire and one of the greatest joys of the ones who perform it", the pianist Andrei Licareț declared.

"Brahms creates his first far-reaching opus, demonstrating a perfect grasp of musical construction's logic, together with the full romantic expression. The personal life's tumult, doubled by the search for the artistic self, also gave a unique proof of the Brahmsian genius. It is rather unusual in confidence and imbalance, but extraordinary just through the originality and the greatness of the ambitions which created it", declared the musicologist Mihai Cojocaru.

7:00 p.m., the Great Hall of the Romanian Athenaeum

"Piano and OrchestraConcerto no. 1 in D Minor Op. 15" by Johannes Brahms

Payment only in cash

- Online, accessing the site www.fge.org.ro - section "Calendar". Tickets once purchased are only refundable under the conditions provided by law.

Access to the hall of the Romanian Athenaeum is allowed "with the participation of the public up to 50% of the maximum capacity, if all participants are vaccinated against SARS-CoV-2 virus and for whom 10 days have passed since the completion of the vaccination scheme. Also, persons who are in the period from the 15th to 180th day after testing positive for SARS-CoV-2 and assure the wearing of the protective mask are also allowed". Checking of these conditions will be done before entering the Romanian Athenaeum.

Charles Olivieri-Munroe studied music at the Royal Conservatory of Music and at the University of Toronto. He graduated in 1992 from Boris Berlin's piano class. He was the youngest conductor to receive three times the "Chalmers" award, from the Ontario Arts Council. In 2000, after winning the 1st prize at the international "Spring Festival in Prague" and the awards offered by Supraphon Records, City of Prague and Czech Radio, the conductor embarked on a successful international career. In the 2007-2008 season he made his debut at the National Opera in Prague with Dvorak's "Stabat Mater". In 2010 he was appointed musical director at the Warsaw Chamber Opera where he conducted a show with Stavinsky's "Rake's Project" and also since 2010 he has been principal conductor at the Philharmonie Südwestfalen. Under his leadership, the North Czech Philharmonic has become a prestigious international ensemble which, besides concerts, makes numerous recordings - with SONY, RCA Red Seal, NAXOS, SMS Classical, Naïve Records - which are broadcast on radio stations everywhere. In 2008 he held the position of principal conductor at Colorado's "Crested Butte" Festival (USA) and that of artistic director at the Inter-Regionales Symphonie Orchester (Germany). He collaborates with the Czech Philharmonic Orchestra, the "Spring Festival in Prague" International Festival and teaches conducting at the Prague Academy of Music. In February 2014 he successfully conducted Schumann's "Genoveva" at the Dvořák National Theater. In the 2013-2014 season he toured with the North Czech Philharmonic in Southeast Asia and gave the first concert of a European orchestra in the capital of Cambodia.

Born in Bucharest, Andrei Licareț began playing the piano with his father, at the age of 5. At the age of 11, he made his debut as a soloist, performing Mozart's "Piano Concerto in C Major, KV 246" together with the Bucharest Philharmonic Chamber Orchestra. He attended the "George Enescu" High School of Music in Bucharest, where he studied with Gabriela Enășescu.

At the University of Music in Bucharest he had as professors ViniciuMoroianu, Dana Borşan, SteluțaRadu, ȘerbanSoreanu and Dan Dediu with whom he also studied composition. Andrei Licareț also won the 1st Prize at the "Jeunesses Musicales" and Bucharest's "Yamaha" competitions and was awarded the Lory Wallfisch Prize. Also, he received the 2nd Prize at the Tel-Hai and the Shreveport Concerts Contests.