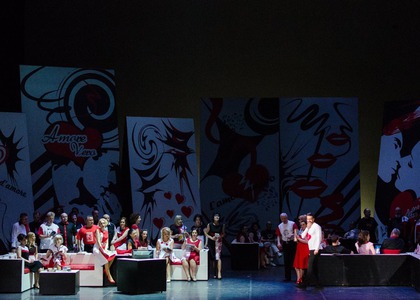 Paula Iancic in 'La Bohème', Iulia Isaev and Marius Vlad Budoiu in 'Lohengrin' and Ioan Hotea in 'The Elixir of Love' invited on the stage of the Bucharest National Opera

In the second week of February, the Bucharest National Opera prepared for the audience a program of opera and ballet performances with titles such as "Baiadera" by Ludwig Minkus, "La Bohème" by Giacomo Puccini, "Lohengrin" by Richard Wagner and "The Elixir of Love" by Gaetano Donizetti.

The ballet show "Baiadera" by Ludwig Minkus will take place on Thursday, February 10th, at 6:30 p.m. Is there that supernatural force that irrevocably, fatally decides all actions and events in people's lives? Discover "Baiadera", an exceptional ballet shrouded in the mystery of India, a story about fate, regret, and love beyond death, on the stage of the Bucharest National Opera.

On Friday, February 11th, at 6:30 pm, we will offer the show "La Bohème" by Giacomo Puccini, a masterpiece of verism that, for over 125 years, has impressed and excited the audience of all generations of music lovers. It is one of the most representative works in which the life of young people and the atmosphere of their youthful spirit are sublimely sung. The soprano Paula Iancic, who was part of the group of young artists of the Opera Studio at the Bayerische Staatsoper in Munich, is invited to play Mimi, where she had the opportunity to improve and gain artistic experience with great contemporary artists and starring in Donizetti's "Sweet Elixir" (Giannetta), Krenek's "Der Diktator" (Maria), Humperdinck's "Hänsel and Gretel" (Taumännchen), Puccini's "Sour Angelica" (Sister Dolcina), and more. On the ONB stage, she will play the role of Mimì after the success in Iași, Cluj and Timișoara in 2017-2019, but also in Poznan in Poland, theaters where, after winning the Grand Prize at the Virginia Zeani International Singing Competition in Târgu Mureș. Soprano Paula Iancic will give the character Mimi the youthful freshness and temperamental strength in full formation at the beginning of her career.

On Saturday, February 12th, at 6 p.m., we invite you to the show "Lohengrin" by Richard Wagner, directed by Silviu Purcărete, made in a new premiere almost two months ago during the events marking the Jubilee Season of the Centenary of the National Opera in Bucharest. The title role will be played by Marius Vlad Budoiu, lyrical tenor with a wide repertoire and who, at artistic maturity, also approached roles as a dramatic tenor in works such as: "Force of Destiny" by Verdi (Don Alvaro), "Otello" by Verdi (title role), "Turandot" by Verdi (Calaf), "Samson and Delilah" by Saint-Saëns (Samson). In 2013, Marius Vlad Budoiu sang under the baton of Daniel Barenboim the role of Froh in Wagner's "Gold of the Rhine" from the Tetralogy "Inselul Nibelungilor" by Wagner at the Berlin State Opera with which he also toured at the Teatro alla Scala in Milan and at the Proms Festival, at the Royal Albert Hal. He has collaborated with conductors Zubin Mehta, Rafael Frühbeck de Burgos, Gennady Rozhdestvensky, Antonio Pappano, Lawrence Foster, Peter Ruzicka, Marek Jankovski, Friedrich Haider, Cristian Mandeal, appearing at the Munich Philharmonic, Hamburg Philharmonic, Staatskappelle Berlin, Berliner Symphon Dresden, Santa Cecilia in Rome, with operas from Bucharest, Bratislava, Budapest, Freiburg, Marseille, Toulon and others.

On Sunday, February 13th, at 6:30 pm, we are waiting for you at the show with the opera "The Elixir of Love" by Donizetti. At the conductor's desk will be the conductor Vlad Iftinca as a guest. The audience will be able to watch again tenor Ioan Hotea as a guest, in the role of Nemorino, an artist with a very prestigious international career started immediately after winning the Grand Prix at The Operalia Competition and the Hariclea Darclée International Singing Competition in Brăila. He had great successes and enthusiastic chronicles, especially in the wide repertoire: "I Capuleti ei Montecchi" (Tebaldo), "I Puritani" (Arturo) by Bellini, "Don Pasquale" (Ernesto), "Daughter of the regiment" (Tonio ), "Lucia di Lammermoor" (Edgardo) by Donizetti, "Manon" (Des Grieux) by Massenet, "Cosi fan tutte" (Ferrando), "Don Giovanni" (Don Ottavio) by Mozart, "La Traviata" (Alfredo) , "Rigoletto" (Duca di Mantova) by Verdi and others. Since 2013, he has had international appearances: at the Paris Opera, at the Royal Opera House Covent Garden, at the Vienna State Opera, at the Monte Carlo Opera, at the Opéra du Rhin Strasbourg; at the Deutsche Oper am Rhein Düsseldorf, at the Wiesbaden State Theater, at the Stuttgart Opera, at the Bavarian State Opera in Munich. We are pleased to offer our audience the reunion with the virtuosic rigor and temperamental warmth with which this young artist has conquered the public and the critics in his international career.

Tickets on http://tickets.operanb.ro/ and from the Ticket Office of the Bucharest National Opera.

And because we want to stay healthy, we invite you to consult the rules for participation in shows available on the institution's website at the link: