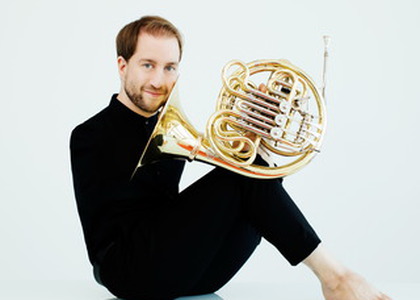 An exceptional artist and an impressive life story: FELIX KLIESER, a young German musician who plays the horn only using his feet. Living with a locomotive disability, as he was born without arms, Felix Klieser is currently enjoying an extraordinary international career, proof that talent, ambition and passion can get past any obstacle. At five years old, Klieser was taking horn lessons, at thirteen he became a student at the Hanover University of Music, Drama and Media and in 2014 he received a prestigious distinction in Germany - ECHOClassic Prize for Most Talented Young Artist. He published his autobiography the same year, describing his unique life story, and in 2016 he received the Leonard Bernstein prize at the German Schleswig-Holstein Music Festival.

On Wednesday, February 23rd 2022 (starting 7PM) you'll have the chance to applaud Felix Klieser on the Radio Hall stage in a beautiful concert presented by the Radio Chamber Orchestra and conducted by Nicolae Moldoveanu.

The German horn player will perform Richard Strauss' Concerto no. 1 in E-flat Major for Horn and Orchestra. The evening will also include Schubert's Ouverture in the Italian Style and Haydn's Harmoniemesse, the Austrian composer's last piece. The piece was performed at the Vatican at St Peter's Basilica in May 2009 on the two hundred year anniversary of Haydn's death and with the celebration of Rusalii. Harmoniemessewill be performed at Radio Hall by the Radio Academic Choir (conductor Ciprian Țuțu) and vocalists Ramona Mardare (soprano), Grazziela Frangulea (mezzosoprano), Nicolae Simonov (tenor) and Cristian Coandă (bass).

Violinist, accompanying artist, organist and conductor Nicolae Moldoveanu is one of the Romanian musicians who has built a strong presence in the international artistic world. His musical education has led him through superior European learning institutions, from the Leipzig Conservatory (where he studied the organ) to the Zürich Conservatory (where he dedicated himself to the art of conducting), Basel, Bern and lastly to the Royal Academy of Music in London.

In the 2020/2021 season, Felix Klieser has played next to the London Mozart Players, Salzburg Chamber, the Berlin Philharmonisches Kammerorchester, and the Bournemouth Symphony Orchestra etc. The tours with CHAARTS Chamber Artists Ensemble and the Lucerne Festival Strings Chamber Orchestra have led him on travels in Switzerland, to the MünchenPrinzregententheater, and the Hamburg Elbphilharmonie. Around the same time he has also been appreciated at the Bucharest George Enescu International Festival.

A full recording of Mozart's concerts for horn was launched in March 2019, recorded with the Salzburg Chamber and produced by Berlin Classics. The album stayed in Germany's Classical Music Top 10 for three months. His debut album, Reveries, including pieces for piano and horn, was launched in 2013 and received the ECHO-Klassik prize. This was followed by the 2015 album Concerts for Horn, Klieser's first orchestral CD featuring pieces by Mozart and Joseph and Michael Haydn. He launched his third album Horn Trio in September 2017, recorded alongside violinist Andrej Bielow and pianist Herbert Schuch at the München Bayerischer Rundfunk.

The concert will be live streamed on all the Radio România Cultural and Radio România Muzical frequencies, as well as online on the two radio stations' websites. Access to Radio Hall will be permitted only under the current laws and conditions. Tickets are available online on iabilet.ro. Tickets are also available in Flanco stores, Rompetrol gas stations, Unirii 1 Subway Station, Muzica Stores, IQ BOX, Uman and Selfpay terminals. You can pay online through card, PayPal, Sodexo cultural tickets, Vodafone and Orange subscriptions or cash through delivery services anywhere in the country.