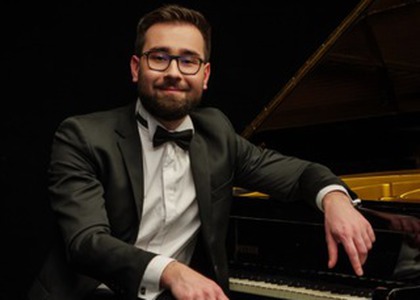 The Oradea State Philharmonic opens the recital season with an event shrouded in such a warm love feeling, expressed throug works composed by Ludwig van Beethoven, PyotrIlych Tchaikovsky and Modest Mussorgsky. The recital will be given by the pianist Mihai Diaconescu at Sala Enescu-Bartók, on Tuesday, February 22nd, at 7.00 p.m.

The recital will open with Sonata op. 109 in E major, composed by Ludwig van Beethoven, the composer of some of the most beautiful piano works in the history of music. This piece is one of the last sonatas composed by Beethoven and the high point of interest is concentrated in the third part, where the main theme is expressed through many variations. The sonata seduces the listeners through its intimate nature, giving up the strong Beethoven drama and approaching a special lyricism. In addition to focusing on the last part of the piece, another feature of the composer's late sonatas is the significant use of the third interval.

Three-piece op. 9 by PyotrIlych Tchaikovsky are 3 separate piano pieces, but performed together. As with Beethoven, these move away from the concert hall and are composed more to be performed in the intimate halls. The first song Rêveriegives the impression of free improvisation, the second one expresses its purpose in the title Salon Polka, after the name of a Slavic dance brought to the elegant salons of the time. In the last piece, the influence of Chopin is noticeable, here again dealing with a Slavic dance for the salon, this time Mazurka. The main theme, together with the central section of popular influences, led to numerous transcriptions of the play, some entitled Waltz Créole.

The last part of the recital encapsulates even more the character of Russian music. Pictures at an exhibition by Modest Mussorgsky is a ten piece suite meant to be played on the piano. This is Mussorgsky's best-known piano work, not to be missed in the piano virtuoso repertoire. There are also multiple orchestra adaptations, most often performed being hte one belonging to Maurice Ravel. The programmatic title of the suite comes from a collection of paintings by artist and architect Viktor Harmann. The composer and the painter probably met in 1868 and quickly became friends, due to their common interest in Russian art. Inspired by Hartmann's work, Mussorgky plastically expressed in music what can be seen in the artist's paintings.