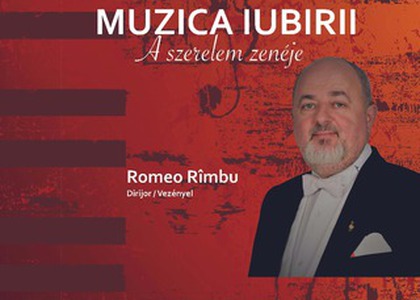 The music of love at the Oradea State Philharmonic

G. Donizetti - Overture to the Elixir of Love

Dave Brubeck: It's a Raggy Waltz

Irina Odăgescu: For Longing and for Joy

The Oradea State Philharmonic celebrates Dragobetele alongside music lovers with a concert titled The Music of Love that will be taking place on Thursday, Feburary 24th at 19:00 in the Enescu-Bartok Concert Hall. The wings of Cupid will be bringing the music of the last two centuries, a diverse selection of opera pieces and modern vibraphone resonance. Robeo Rîmbu will be sharing love through music, accompanied by the orchestra and soloists: Sorin Petrescu - piano, Doru Roman - vibraphone, xylophone and percussion, Ancuța Pop - soprano and Gavril Țărmure - hora player.

In opening, the orchestra will bring the public the elixir of love via the eponymous overture. Gaetano Donizetti found the recipe for this concoction and wrote the Elixir of Love opera in the first half of the 19th century. It held first place within Italian theatres' repertoires for a decade. Next, Salut d'amour by Edward Elgar. Initially a piece for violin and piano, later published as variants for the cello or for a small orchestra. The piece was dedicated to writer Caroline Anne Roberts, who would later become the composer's wife. The next piece, Black Eyes, comes from Russia, presented in an arrangement by Adalgiso Ferraris. Originally, the piece was part of Russian folklore under the name Очи чёрные, but it became known by the Italian composer's arrangement. The programme will then move on from folklore to jazz. It's a Raggy Waltz is the first track on the Dave Brubeck Quartet's album, Time Further Out. It's written by Dave Brubeck himself, the quartet's pianist. Romanian music will be represented by the piece titled For Longing and for Joy by Irina Odăgescu; a prominent figure in contemporary Romanian culture thanks to her pieces that span across nearly all musical genres. On a more modern note is the vibraphone piece titled The traveling carnival, written by John Porter, a producer in today's musical industry. The concert will end with a journey across the Atlantic Ocean. Winter's Crossing, by contemporary Irish composer Phil Coulter is the last track on the album bearing the same name; it tells the story of hopeful Irishmen that brave the churning ocean in order to reach the Americas.

Sorin Petrescu started his musical studies in his hometown of Timișoara, then moving on to mastering his craft at the National University of Music in Bucharest. His career started with the Banatul Philharmonic Orchestra in Timișoara, where he still performs concerts as a soloist. He also promotes contemporary music as a member of the Contraste trio. During his career, Sorin Petrescu has been the winner of several important national and international competitions, and has participated in numerous prestigious festivals, such as the George Enescu Festival as well as the Darmstadt (Germany), Bogota (Colombia), Hong-Kong (China) festivals promoting contemporary music. Besides his activity in the concert world, he has also recorded pieces for radio, TV broadcasts and record companies.

From the Western part of the country comes the next soloist. Doru Roman, born in Timișoara, he graduated from the Ion Vidu Music School, then entered the Gheorghe Dima Academy of Music in Cluj-Napoca. His career started with the Timișoara Romanian Opera, followed by the Banatul Philharmonica. Doru Roman expanded his knowledge by teaching classes at the University of Music in the same city. In high school, Doru Roman won several percussion competitions, his artistic value being demonstrated by his participation at numerous festivals in Germany, Switzerland and France, as well as concerts performed alongside the Romanian and Taiwan orchestras. Currently, Doru Roman is a member of the Contraste trio, Gentis, and he coordinates the Percutissimo Ensemble of the Timișoara University of Music.

Soprano Ancuța Pop Măslină has studied canto and piano at the Oradea School of Arts under the careful guidance of professor Pop Eleonora. A graduate of the University of Oradea, Department of Music, she studied the art of singing under maestro Ion Țibrea and soprano Lavinia Cherecheș starting 2001. She's had a lot of artistic and teaching experience both within the country and outside of it. Alongside the Oradea Philharmonic Choir, she participates in numerous cultural events of high prestige as a member of the choir and as a soprano soloist. During the Morricone Tournament in 2015-2019 (alongside the Oradea Philharmonic Choir) and Debrecen (alongside the Prague Philharmonic Orchestra), the soprano has made quite a name for herself beyond the country's borders.

Gavril Țărmure was born in Bistrița and he inherited his love and talent for music from his parents. His path brought him to Bucharest, where he graduated from the School of Music, the trombone department. Returned to Bistrița, Gavril Țărmure created the Bistrița Society of Concerts, where every year several dozen symphonic and chamber concerts are held. Here he promoted prestigious artists such as Grigore Leșe and Ada Milea at the beginning of their career. The cultural insitution also supports writers, philosophers and photographers, holding art and photography exhibitions as well as theatre shows and book editings.

Conductor Romeo Rîmbu is a teacher at the University of Oradea, Department of Arts, as well as a permanent conductor for the Oradea State Philharmonic Orchestra. His artistic endeavors are joined by concerts where he furthers his oboe skills. As a soloist, his performance of the Oboe and Orchestra Concerto by W.A. Mozart at the world renowned Musikverein concert hall in Vienna is most notable.

We eagerly await your visit!

The ticket prices for the vocal-symphonic and symphonic concerts of the Oradea State Philharmonic for 2021-2022:

Category F (for students of Romanian schools and universities of art and music): 10 ron

Tickets on sale at (https://www.bilete.ro/muzica-iubirii-a-szerelem-zeneje/) and at the Oradea State Philharmonic ticket booth.