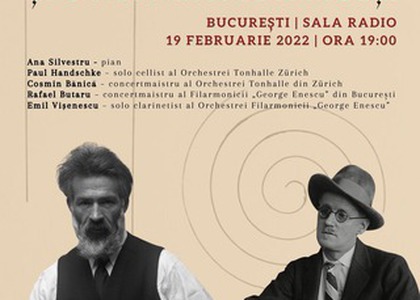 Solemnly, the group of musicians came from behind the scenes of the Radio Hall, on whose stage the piano and rostrums were arranged in a semicircle. The white scores, tied in the middle, were opened, rustling in the warm evening air. Looking down at the stage I thought: We are entering the altar of music.

I just paraphrased the beginning of the famous novel "Ulysses" by James Joyce. Both he and Constantin Brâncuși were celebrated on Saturday, February 19th, with a concert dedicated to the friendship between the two artists. That day marked the 146th anniversary of the birth of the Romanian sculptor, and at the beginning of the month, on February 2nd, the centenary of the publication of James Joyce's master piece was also marked.

Musical works composed in the last century made up the program of the evening, and from an interpretive point of view, the recital took place flawlessly. The five musicians managed to attract and captivate a young audience, on a Saturday night, an impressive fact considering the possible options in Bucharest.

Béla Bartók's trio "Contrasts" was the first work, performed convincingly: it fulfilled its function of capturing the public's attention and emphasizing from the beginning the abilities of the three performers - violinist Rafael Butaru, clarinetist Emil Vișenescu and pianist Ana Silvestru. I then listened to Sonata III "in Romanian popular character" by George Enescu, performed by Cosmin Bănică and Ana Silvestru; it was an authentic and lively version. The naturalness of the interpretation and the attitude towards the musical art could also be observed when the violinist had to tune in, during thet hird part; before resuming, the pianist addressed the audience as follows: "Just as Brâncuși did so many variations, both at Sărut and Măiestrele, so do we at Enescu."

This approach was obviously appreciated by the public, signaling the way in which these musicians relate to the two artists to whom the evening was dedicated.

The collaboration with the cellist Paul Handshke was also auspicious: he first took the stage to perform the Sonata for cello and piano by Claude Debussy, with Ana Silvestru, in a version that proved that the two musicians acquired the aesthetic values ​​of the French composer.

The trio for piano, violin and cello on popular Irish themes by Frank Martin ended the evening's program, being performed by Cosmin Bănică on violin, Paul Handshke on cello and pianist Ana Silvestru. We can congratulate her both for the making of the program and for its evolution during all the four works that the public enjoyed, as it appears from the reactions of the spectators at the end:

"I expected it to be more lively at first, but I liked that it had a more serious tone. And I reallyl iked the final part, with the cello. "

"I liked it very much. It really was very successful. It seemed very balanced to me. "

"The combination of the Romanian theme, that is Enescu, and the Irish themes was very interesting, precisely in this idea of ​​the friendship between the two great artists. And, overall, I think the rhythms and the idea itself harmonized very well. "