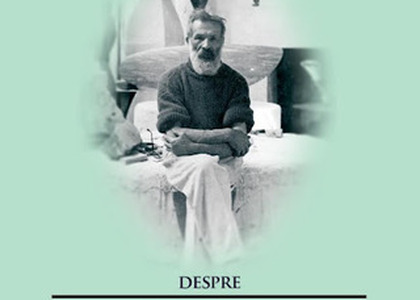 Released in Bruxelles in December 2021 after the 145th celebration of Constantin Brâncuși's birth, the small volume written by Ana and Dan Trestieni was published by Editura Ambra, and it offers a comprehensive and accesible look into the Romanian sculptor's great work and life. Since the main author is a poet and her husband is a sociologist, the book does not present itself as a monograph of great expertise. Ana Trestieni confesses that the determination to complete this editorial feat was powered by personal motives, after the public's attention was drawn, in 2018, by a journal page where she reflected upon Brâncuși's person. These are most likely the main reasons why the writing style of the micro-monograph seems to be that of an essay, fragmented and dotted by personal observations often left unexplored. At the same time, the obvious ambition of the book lies in its showcasing of all important aspects of Brâncuși's creation, arranged in an estetic and biographic context. Thus, without being presented and supported by scientific means, the information is plentiful and mainly of educational purpose, thanks to a repetitive, synthesised overview.

The book paints a clear portrait of Brâncuși, using the cronological evolution of his life, from his birthplace of Hobița to the Parisian and American consecration, as well as showcasing fragments of his personal correspondence and the opinions of his illustrious contemporaries. The arguments are supported by overviews of essential ideas put forth by other important monographies, and these familiarize the reader with a fascinating and sophisticated field, inviting them to meet this unique, magnetic personality. A larger audience could be especially interested in the short dyads between Brâncuși and other diverse artists he met while alive: Apollinaire, Modigliani, Joyce, Ionescu, Tzara, Duchamp etc. The authors also analyze a selection of Brâncuși's most representative sculptures, thus filling in the contents. The main point of the book - which cements itself in the reader's mind by its insistence and detail - lies in the modern dimension and conceptual ingenuity of the sculptor's creations. We see the idea of Brâncuși's original genius, rooted in Romanian traditions and archetypes, but taken to universal dimensions.

Despite the numerous typesetting errors, the 'Despre Brâncuși' micro-monograph is a worthy contribution towards awareness of the subject, and we recommend it, especially to young people, as a useful introductory guide to early 20th century art.