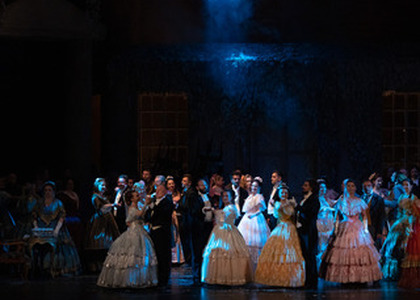 “Evgheni Oneghin”, “Corsarul”, “Tosca” and “Carmen”, on the stage of the Bucharest National Opera

Next week, in the Great Hall of Performances of the Bucharest National Opera, we invite you to watch the opera performances "Evgheni Oneghin" by Tchaikovsky, "Tosca" by Puccini, "Carmen" by Bizet and the ballet show "Corsarul" by Adam, all doing part of the current repertoire of the theater.

On Thursday, March 3rd, at 6:30 pm, we are waiting for you at the opera show "Evgheni Oneghin" by Tchaikovsky, directed by Ion Caramitru. Maestro Iurie Florea will be at the rostrum. The opera "Evgheni Oneghin" was first performed on March 17th, 1879, by students of the Moscow Conservatory, under the musical direction of Nicolai Rubinstein. Tchaikovsky feared the lack of stage effects because the play had been conceived as an "intimate but powerful lyrical drama", as he himself characterized it. Two years after the first performance, the opera entered the repertoire of the Moscow Grand Theatre on June 11th, 1881, quickly becoming one of the audience's favourite works. Since then, its popularity has grown steadily, becoming, over time, part of the universal musical heritage. Tchaikovsky's compositional genius has made music of great expressive richness, and the vocal scores of the main characters offer fascinating dramaturgical characterizations both in terms of portraiture and in terms of the theatrical relationship between the characters. Distribution of the March 3rd performance: Oneghin: Florin Estefan - guest, Tatiana: Crina Zancu, Lenski: Andrei Lazăr, Olga: Maria Miron - guest, Gremin: Filip Panait, Larina: Sorana Negrea, Filipievna: Andreea Iftimescu - guest, Triquet: Valentin Racoveanu, Zaretsky / Captain: Dan Indricău.

The ballet show "The Corsair" by Adam, directed and choreographed by Vasily Medvedev, will take place on Friday, March 4th, at 6:30 p.m. Maestro Ciprian Teodorașcu will be at the rostrum. In a romantic spirit, the story of classical dance steps transposes the love story between a pirate and a slave, and the action takes place in Adrianople, at the beginning of the 19thcentury. Ballet, extremely demanding from a technical and interpretive point of view, has been in the distribution of big names of the Bucharest national scene for a decade. Adolphe Charles Adam confirms to us in the specificity of his creativity dedicated to the choreographic movement the universality of love as an affective state in human existence.

On Saturday, March 5th, at 6:30 pm, we invite you to the opera show "Tosca" by Giacomo Puccini, directed by Mario De Carlo. Maestro Tiberiu Soare will be at the rostrum. The impressive opera, which was based on a play by the French playwright Victorien Sardou, "Tosca" is, without a doubt, a powerful drama, like the life from which it was masterfully essentialized by the composer; is a drama of great love - between a diva of opera music, Floria Tosca, and a talented young painter, Cavaradossi - a drama confronted with historical realities of the time such as the reign of Maria Carolina, the daughter of Maria Theresa and the sister of Maria Antoaneta, and of the final defeat of Austria by Napoleon in the battle of Marengo, with actions laden with sadism, with extremely strong feelings such as jealousy, hatred, fear. For the Romanian opera tradition, it is a title of legitimate pride that the central character of this opera was created for the voice of the legendary Romanian soprano Haricleea Darclée who played the role at the absolute premiere in Rome on January 14th, 1900, but also in other major theatres. of the world. The famous Vissid'arte aria, originally non-existent in the original score, was elaborated and proposed to the composer by the protagonist of the absolute premiere, Hariclea Darclée. Distribution of the March 5th performance: Floria Tosca: Carmen Gurban - guest, Mario Cavaradossi: Alin Stoica, Scarpia: Valentin Vasiliu, Cesare Angelotti: Marius Boloș, Sacrestano: Ion Dimieru, Spoletta: Valentin Racoveanu, Sciarrone: Dan Indricău, A jailer: Filip Panait, A Shepherd: Zsuzsana Cerveni - debut.

On Sunday, March 6th, at 6:30 pm, we are waiting for you at the opera show "Carmen" by Bizet, directed by Marina Emandi Tiron. Maestro Vlad Conta will be at the rostrum. One of the most beloved opera creations of all time "Carmen" by Georges Bizet is today a challenge both for directors and for set designers and choreographers who stage the suite signed Georges Bizet / RodionȘcedrin. Even the most nonconformist montages, which sometimes bring the action to the present day, cannot bypass the Spanish-specific atmosphere suggested by the music. The folk-inspired sounds used by the composer Georges Bizet impose at each staging the presence of elements that situate the action in Seville, a city full of colour, the sound of chestnuts and flamenco steps. Just these days, on March 3rd, it will be 147 years since the absolute premiere at the Opéra Comique in Paris, an event that did not have the desired success of the composer who passed away exactly three months later, on June 3rd. But later, the popularity of this work grew and continues to remain today among the most beloved titles of the opera repertoire. At the absolute premiere, the role of Morales was played by a very good friend of Bizet, baritone Edmond Duvernois, a person of great value in singing pedagogy; Duvernois prepared the career launch of the young Haricleea Hartulary and presented it to Charles Gounod and later became the legendary Hariclea Darclée. One of Duvernois' most beloved students at the Paris Conservatory was Romanian tenor Constantin Stroescu, who, after a prestigious international career, passed on everything he had learned about Carmen, Bizet's turmoil, the depths of Meilhac's libretto, and Halévy, his student at the Bucharest Conservatory, mezzo-soprano Elena Cernei, who would become one of the greatest performers of this role in the universal history of lyrical theater. The show on the stage of the Bucharest National Opera is built in warm tones, in which shades of yellow, orange and red abound. Distribution of the March 6 performance: Carmen: Oana Andra, Don José: LiviuIndricău, Micaëla: Mihaela Stanciu, Escamillo: Ștefan Ignat, Frasquita: Stanca Maria Manoleanu - guest, Mercedes: Sidonia Nica, Le Dancaïre: Lucian Corchiș, Le Remendado: Valentin Racoveanu, Zuniga: Horia Sandu, Moralès: Daniel Filipescu.

For tickets, accesshttp://tickets.operanb.ro/ or you can buy them from the Ticket Office of the Bucharest National Opera.

And because we want to stay healthy, we invite you to consult the rules for participation in shows available on the institution's website at the link: https://operanb.ro/regulament-de-participare-la-spectacole/