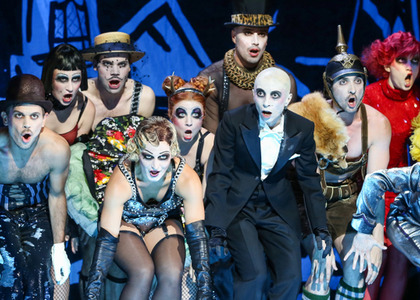 Before I start writing this reports, I felt the urgent need to find out what else can be found in the 2021-2022 season in the Volksoper repertoire in Vienna. I pick the the shows out of a February's week: Kiss me Kate, musical by Kole Porter, operetta The Land of Smiles by Franz Lehar; Cabaret, musical by Johann Kander; Jungle Book, a show called "for families", in matinee, at 11 a.m., and in the evening a brave ballet show consisting of three pieces: 24 Preludes by Alexei Ratmansky, Lux umbra (premiere) by Andrei Kaydanovskiy and In Sonneverwandelt (premiere) by Martin Schläpfer. I'm moving on to March and, besides these titles I also discover the Traviata operetta by Verdi, the Peter Pann children ballet, the The Bat operetta by Strauss-the son, La Cage aux Folles, musical by Jerry Hermann, also premieres ballet to the music of a German Requiem by Brahms. I must confess, I am deeply impressed by the variety of the repertoire and if each title has a performance/interpretation as good as the Cabaret that I attended to on Sunday evening, 20th of February was - and I don't see why I wouldn't accept this quality standard-, then my amazement will turn into the sincerest respect.

When you say Cabaret, you mean - or at least the people from my generation do nevertheless - the film of the same title (1972), winner of 7 Oscars, directed by Bob Fosse, starring Liza Minnelli, Michael York and Joel Grey. For a long time, this impressive achievement overshadowed everything around it. But 40 years have passed and look, the artistic world takes courage and brings back on the stages this completely exceptional musical, without any fear of not resisting comparison. It's a 1966 score with music of John Kander, lyrics by Fred Ebb and the script of Joe Masterhoff. A resounding success of Broadway, the first in a series of masterpieces of the genre signed by the couple of creators Kander-Ebb, if we were to think only of Chicago now.

Recently, the actors of the Odeon Theatre in Bucharest managed, under the direction of Răzvan Mazilu, a brilliant version of the Cabaret. I appreciated the performance, I bow to the huge effort, but I can't ignore but I can't ignore the objective disadvantage of the Romanian performers who are actors but not dancers or/and singers. Based on many other brilliant shows seen over time on the Volksoper stage, for Cabaret my expectations were very high when I entered the gate of the Viennese Volksoper show institution. But no matter how ambitious these expectations were, they were much exceeded.

The subject of the musical seems simple, but it's just the tip of the aisberg. An American writer. Clifford Bradshaw (Jörn-Felix Alt), arrives in Berlin in search of a jubject for his new novel. Berlin in the 20s and 30s is a bright, hectic metropolis, with turbulent nightlife, furious declarations of absolute freedom of thought and action, with intense feelings in which the optimism that life never ends stands next to the pessimism which says that life ends here and now. The famous Kit-Kat Cabaret, with evenings shows which aim to make you forget about real life and completely abandon yourself with the saving laughter, is the reverse of a coin that also offers the dull image of a bourgeois boarding house held by a widow frightened by everything that happens around her. A cheap guesthouse, this is what our writer is searching for but, at the same time, he is attracted with a magnetic force to the brilliance of the Cabaret where he meets the beautiful Sally Bowles (Bettina Mönch) who involves him in a love story, impossible to complete. Everybody's destinies seem to be driven by an alter-ego of the famous Shakespearean Puck, the Master of Ceremonies, here masterfully played by Ruth Brauer-Kvam in an acting performance doubled by an extraordinary physical endurance (he's always on the stage!). The Sally-Clifford romantic story unfolds in parallel with a tender love story between the widow Miss Schneider (Angelika Kirchschlager) and the old Jewish fruit seller, Mr. Schultz, a story which the Nazi fury mercilessly destroys. What should be taken into consideration above all in this production is the layout of the score that released well known songs such as Willkommen, Bienvenue, Welcome!, Mein Herr, Money, Maybe This Time.. With the help of a serious and numerous musical theater ensemble, Lorenz C. Aichner performed spectacular orchestrations: with many blowers and a large percussion instrument for cabaret songs, or a special attention to the strings in the ballads about love and hope.. The great merit of director Gil Mehmert is, I think, to have extraordinarily transformed the brilliant American cabaret model used by Bob Fosse in the 1972 film into a real German cabaret, rougher, tougher, with more nuances of grotesque and less superficial refinement and spectacle. The best evidence is the image created for the famous Two Ladies, moment in which the partners of a cheerful "ménage à trois" (American version) turns into a rough and lascivious dance in which the partners are Hitler, Stalin and Mussolini, dressed in skirts and tutus and covered with uniforms full of decorations. Thus, a purely comic moment, turns into a political-manifesto number in extremis. And it's not the only example. An extra point of authenticity is also given by some characters depicted as if from the famous paintings of the German artist George Grosz (1893-1959).

The setting of the show, simple and functional, is set on a rotating stage which shows the audience, in turn, either the brilliant Kit-Kat cabaret, where the stage is shaped like a huge piano with the keys in the foreground, or the poor guesthouse of Miss Schneider.

The distribution of the show is numerous. Each artist plays his role flawlessly. You feel like you are witnessing a film production for the creation of which thousands of doubles were shot and only the best ones were chosen. Unbelievable, but true! No weakness, no clumsiness, no hesitation.. Enthusiastic applause for all. But, two characters stand out, dominate the show and impose themselves, strongly polarizing the audience's attention: Master of Ceremonies/Lecturer, fabulous presence, with countless facets, played intensely and credibly by Ruth Brauer-Kvam and Sally Bowles, sung/played by Bettina Mönch, who, although certainly inspired by Lisa Minelli's version, managed to create her own original Sally with absolute benchmark value for the future. I can only conclude that I have witnessed an EXTRAORDINARY show which I warmly recommend to all who visit Vienna in the coming months.