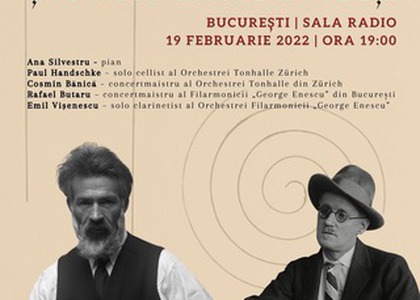 On February 19th, concert celebrating the friendship between Constantin Brâncusi and James Joyce

The friendship between the sculptor Constantin Brâncuși and the writer James Joyce will be celebrated in Bucharest through an extraordinary concert, which will take place on the stage of the Radio Hall on February 19th, from 19:00. "The friendship concert between Constantin Brâncuși and James Joyce", staged by pianist Ana Silvestru, features well-known artists such as Paul Handschke - solo cellist at the Zurich Tonhalle Orchestra, violinist Cosmin Bănică - concertmaster of the Tonhalle Orchestra in Zurich, violinist Rafael Butaru - concertmaster of the "George Enescu" Philharmonic in Bucharest and clarinetist Emil Vișinescu - clarinetist soloist of the "George Enescu" Philharmonic Orchestra.

"This concert is a tribute to the remarkable musicality of Constantin Brâncuși and to important themes of the works of the two great artists: exile, the homeland left behind, but which remained close to their souls, the tragedy of war, fluidity and infinite evolution of the work of art ", declared Ana Silvestru, the one who staged the event.

The concert at the Radio Hall will begin with the Third Sonata "in Romanian popular character" for violin and piano by George Enescu - an emblem of Romanian culture in which, as in "Endless Column", peasant art is elevated to the sublime. The "Contrasts" Trio by Béla Bartók will follow, a work with which Brâncuși, a refined music lover was familiar.

"By joining George Enescu's Sonata III with the" Contrasts "Trio, the public will be able to admire two different approaches to the same culture by two of the most important composers of the 20th century," explained Ana Silvestru.

Afterwards, Claude Debussy's Sonata for Cello and Piano, one of the masterpieces composed during the Great War, a period that James Joyce spent in Zurich, where he attended the Voltaire Cabaret and where he met TristanTzara and Marcel Iancu, will be heard at the Radio Hall. The evening will end with the trio for piano, violin and cello on popular Irish themes by Frank Martin, one of the most appreciated works inspired by Irish folklore.

"I thought of this event knowing that 2022 is the year in which we celebrate a century since the publication of the novel 'Ulysses' and 140 years since the birth of James Joyce on February 2, 1882. And the famous friendship and collaboration between the Irish writer and the Romanian sculptor Constantin Brâncuși convinced us to organize a special concert exactly on Brâncuși's birthday, on one of the most prestigious stages in Romania ", Ana Silvestru also said.

Tickets are available on the www.iabilet.ro network.

Ana Silvestru, an "extremely talented" pianist (Konstantin Scherbakov), "brilliantly endowed with a lively artistic temperament, a splendid sound and a vast repertoire" (Dmitri Bashkirov), was selected by Larisa Gergieva for the first concert organized in Romania by the Mariinsky Theater in St. Petersburg, and in 2020 she performed Liszt's Sonata for the ballet "Marguerite et Armand" in the "Alina Cojocaru Dream Project" program in Japan, in a cast that included Alina Cojocaru, Johan Kobborg, Serghei Polunin and Tokyo Ballet. After graduating from the National University of Music in Bucharest (ViniciuMoroianu class), Ana Silvestru graduated both master's degree and the prestigious diploma of concert soloist with the highest distinction in the class of Konstantin Scherbakov at the University of Arts in Zurich, over the years she received the advice of masters such as: Lazar Berman, Dmitri Bashkirov, Daniel Fueter, Larisa Gergieva, MargreetHonig, Radovan Vlatkovic, Karl-Heinz Kaemmerling, Bernard Ringeissen, Ronald Brautigam. In 2021 she founded the association "Ana Silvestru Classics", through which she organizes, in Romania and Switzerland, concerts and masterclasses for Romanian and Swiss artists.

Paul Handschke, solo cellist of the Tonhalle Zürich Orchestra, was born in Munich in 1993 and began studying the cello at the age of five with Stefan Bonn, continuing with Michael Weiß and David Grigorian, while studying with the most important pedagogues: Wen-Sinn Yang, Wolfgang Emanuel Schmidt, Jens-Peter Maintz, David Geringas. Between 2012-2018, he studied with Thomas Grossenbacher at the University of the Arts in Zurich, and from 2018 he continues his Master's studies in the class of Professor Maximilian Hornung at the MusikhochschuleMünchen. He has collaborated with orchestras such as the Symphonieorchester des BayerischenRundfunks, Zürcher Kammerorchester or Sinfonieorchester St. Gallen.

Cosmin Bănică, concertmaster of the Zurich Tonhalle Orchestra, winner of the "George Enescu", "Tibor Varga" and "Jeunesses Musicales" competitions, sang in the company of the Zurich Tonhalle Orchestra, the "George Enescu" Philharmonic, the National Radio Orchestra, the Orchester Basel Symphony , and during the chamber season of Tonhalle Zürich he performed with legendary artists such as Radu Lupu, Christian Tetzlaff, Julia Fischer, Olli Mustonen, etc.

Rafael Butaru, concertmaster of the "George Enescu" Philharmonic in Bucharest and of the National Opera in Bucharest, has won numerous awards at national and international competitions, is a member of several ensembles and orchestras, such as the "Romanian Chamber Orchestra", under the baton of maestro Cristian Măcelaru and was named "Friend of the Princess Margaret of Romania Foundation".

Emil Vișinescu, an active artist of the national and international scene, has given numerous concerts and recitals throughout his career both as a soloist and as a member of some ensembles. He is a member of the "George Enescu" Philharmonic Orchestra in Bucharest, and since 2002 he has been teaching clarinet at the National University of Music in Bucharest.