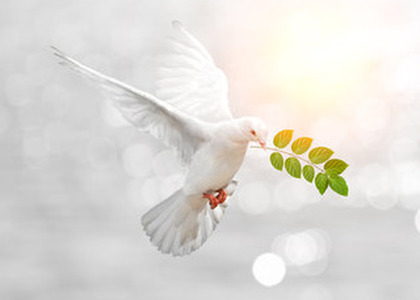 But what does Peace even mean?

Peace is a concept that has its roots in the ancient times of Humanity, represented in a symbolic way by a sacred bird, a dove, holding an olive branch in its beak. Since then, Peace has been equivalent to a state of tranquility, a state free of military conflict, an eternal, transcendent state. In fact, perhaps the best way to understand the meaning of this Notion is through the words of Saint John Chrysostom: "Where there's no peace, everything else is in vain".

However, if we take a look throughout the centuries of human history, times of peace often alternated with times of conflict. That's what we're going through right now, in the middle of the 21st century. An event that affects our Life in every way, even in the cultural way. At a global level, through huge effort, people are looking for solutions to put a stop to the devastating effects of this unprecedented aggression.

In this context, the European Broadcasting Union, through its members, is hosting extraordinary events, to show their support for the suffering of the Ukrainian people and for the Ukrainian artists.

Starting from the idea that "Music is our only weapon", Latvia's Radio, through Radio LRT KLASIKA, is holding on the 3rd of March 2022, the first solidarity and charity concert, entitled "Ukraine - Our music against war". All the best Lithuanian artists - internationally renowned soloists and orchestras-in a program of opuses written by composers from Ukraine (Valentyn Silvestrov, Myroslav Skoryk, Maxim Berezovsky), Lithuania, Latvia and Estonia (Algirdas Martinaitis, Peteris Vasksși Arvo Part).

A concert you'll be able to listen to on Radio România Muzical, during the "Concerte de 5 stele" show, on Thursday, the 10th of March, 2022, starting with 15:30. Producer: Ana Voinescu.

On the 8th of March, 2022, the violinist Anne-Sophie Mutter and three big assemblies - the Munich Philharmonic Orchestra, the Bavarian Radio Symphony Orchestra and the Bavarian State Orchestra - under the baton of the conductor LahavShani, are performing a charity concert for the victims in Ukraine. Proceeds from the concert will go to the humanitarian organization "Save the Children" which has been operating in Ukraine since 2014. The program contains two important pieces from Beethoven's repertoire - The Violin Concerto in D major, Op. 61 for violin and orchestra and The Symphony No. 5 in C minor, Op. 67.

Munich's mayor, Dieter Reiter, stated: "I am very grateful for this initiative and for this gesture of the artists and especially of the three orchestras. The city of Munich shows solidarity with its twin city of Kyiv and with all the people of Ukraine who are facing unimaginable suffering. Now they need our actual support."

A concert that Radio România Muzical will be broadcasting live, during the "Scenaeuropeană" show, on Tuesday, the 8th of March, 2022, starting with 21:00. Commentator: Anca Ioana Andriescu.

Another event is the one taking place at Rudolfinum in Prague, where, on the 14th of March, 2022, the Czech Radio is organizing the extraordinary concert entitled "The Czech Radio for Ukraine". Opening the evening, there will be the two countries' national anthems, in the version of the Czech Radio Children's Choir, conducted by Věra Hrdinková, and then the horn player Radek Baborák, Prague Radio Symphony Orchestra and the conductor Petr Popelka will be performing works of Valentyn Sylvestrov, Reinhold Glière and Antonin Dvorak.

A concert that Radio România Muzical will be broadcasting live, during the "Scena europeană" show, on Monday, the 14th of March, 2022, starting with 20:30. Commentator: Laura Ana Mânzat.

In Austria, in support of the idea of a united and peaceful Europe, various events that took place focused on cultural exchanges between different countries. In this context, in 2018 and 2019, at the initiative of ORF RadioKulturhaus and the Ukrainian Institute, several concerts took place, concerts which now make up the project entitled "Peace shall defeat war". A project inspired by BorysLyatoshynsky's Symphony No. 3, created shortly after the end of the Second World War. In fact, BorysLyatoshynsky is considered one of the founders of modern Ukrainian music, and his works have been attracting attention for several years through his recorded albums.

So, from this series, on Radio România Muzical, on Tuesday, the 15th of March, 2022, during the "Concerte de 5 stele" show, starting with 15:30, you will be listening to the concert given by the pianist AntoniiBaryshevskyi and the Youth Symphony Orchestra of Ukraine, conducted by Oksana Lyniv, in a program of opuses by Ludwig van Beethoven and FranzXaver Wolfgang Mozart. Producer: Alexandra Scumpu.

Also on Tuesday, the 15th of March, 2022 but during the "Scena europeană" show, starting with 21:00, in the first part, you will be listening to the concert given by the violinist Andrii Pavlov and the Vienna Radio Symphony Orchestra conducted by Duncan Ward, in a program of works by Franz Schubert, GerdKühr and Boris MykolayovichLyatoshynsk, and in the second part, a recital by the Danapris String Quartet with opuses from composers like Adrian Mocanu, ValentynSylvestrov, Maxim Kolomiiets and Maxim Shalygin. Producer: PetreFugaciu.

Radio România Muzical takes part in this broad cultural movement under the auspices of the European Broadcasting Unionby initiating and organizing an important project entitled "Solidarity with Ukraine". Therefore, on Thursday, the 10th of March, 2022, during the "Arpeggio" show, starting with 10:00, you'll be able to hear Ludwig van Beethoven's immortal Symphony No. 9.