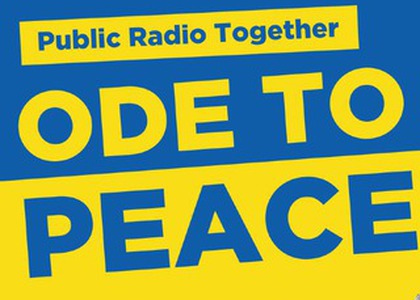 On the 10th of March, over 50 EBU classical music stations and more shall dedicate precious time for the cause of peace as a sign of humanity's good will. They shall unite via a common broadcast of Symphony No. 9 by Beethoven.

Inspired by a Radio România initiative, an EBU member, this transmission can be listened to in over 30 countries during various times of the day. The broadcasters have selected the performers for the occasion of this special day.

Cristina Comandasu, chief-editor of Radio România Muzical and head of the project shares a few words with us about this project.

"When times are rough, we must remember what our good will symbolises and what we are fighting for. The most appropriate symbol for that can be none other than Symphony No. 9 by Beethoven - a masterpiece of human creativity, whichties the notions of brotherhood and peace together. In the last 50 years, this composition represented the anthem of the European Union, aiming to offer support to each person, indiscriminately. Whether you listen to the whole symphony or just the last notes, you shall be drawn to the values that our current society was based on and that others are losing their lives trying to defend."

Radio România started this project in order to prove how the power of the radio can strengthen the support for peace and how it can create a united movement across the entire continent.

"Through Radio România's goal of having a common broadcast of a number of significant classical music stations, the EBU radio organisations have once again showcased that music has the ability to bring comfort, compassion and support. Building ties with other people, radio listeners and musicians across the globe, continues to represent the foundation of our public service."

Details regarding the "Ode to peace - Stop the war in Ukraine" project can be found here.

At Radio România Muzical, Symphony No. 9 by Beethoven can be listened to in its entirety on the 10th of March, from 10 AM. The version that was proposed was realised in 1972 by the Academic Radio Choir and the National Radio Orchestra of Romania, conducted by Igor Markervitch. A famous conductor born in Kiev into a long-standing family of intellectual Ukrainians, that would later become an Italian and French citizen, living in Switzerland and was fighting for the Italian Anti-Nazi resistance during The Second World War: a true European. The soloists selected are: Gheorghe Crăsnaru, Valentin Teodorian, Elisabeta Cartiș, Martha Kessler.

The theme of Symphony No. 9 - The European Union Anthem shall be broadcast on the 10th of March and by Radio Romania Actualitati (11:15 AM) and Radio România Cultural (10 AM)

More musical institutions have joined this project and will include the theme of The European Union Anthem at the start of their concerts on the 10th of March: The Philharmonics in Bucharest, Brașov, Sibiu, Ploiești, Oradea, Cluj-Napoca and the Bucharest National Opera House.

This theme can be listened to throughout the entirety of Romaniaon the 10th of March, via the "Listen to 5 minutes of classical music" project proposed by Radio România Muzical in unconventional spaces: supermarkets, malls, company offices, bookstores, etc.