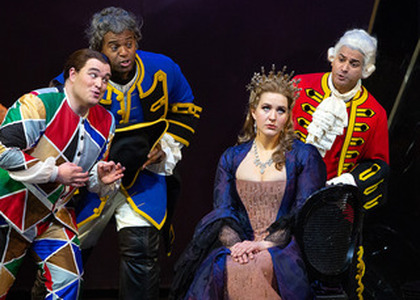 Lise Davidsen, in her internationally acclaimed opera Ariadne on Naxos

Straussian opera creation is staged - too rarely! - in my opinion. Although, as Romain Rolland beautifully said: "Richard Strauss is - without any doubt - the last great event in the music of the last century"; and this creation comprises no less than 18 scores, in which R. Strauss's inspiration and knowledge of opera composition - modern and original! - could raise new starting points for today's creators, as well as great interest from the public.

"The Knight of the Rose", "Capriccio" or "Ariadne on Naxos" - were indeed a bit luckier than the others. But, even these scores are rarely found on posters. Therefore, the success of the Norwegian soprano Lise Davidsen in the title role of "Ariadne on Naxos" is all the more remarkable - and not to be missed in live broadcast! - because the title in question is a long way from the popularity of "La Traviata", "Lucia" or "Tosca"; and the scene that brings us this performance is... The Metropolitan Opera House in New York.

... "a voice that seems to know no limits. Sweet and delicate - in the piano moments, steel-edged - in the forte and sonorous treble (...) a voice of impeccable roundness in all registers, carrying great dramatic weight (...) a name to remember" - wrote one reviewer following her debut in the title role in the opera "Ariadne on Naxos" in June 2017 at the Glyndebourne Festival.

... the artist who "has triumphed on the stage of the most powerful opera artists in a way that not many do, unleashing on the Metropolitan Opera House stage iridescent bridges between a solar treble and a low register of immense depth" (Opera News, the 3rd of March 2022)

... "above all else in the performance of Ariadne on Naxos"(New York Classical Review, the 2nd of March 2022)

"Ariadne on Naxos" made in MET

Composed after repeated trips to Greece, "Ariadne on Naxos" once again retraces Richard Strauss' (now in his 50s) journey back to Ancient times. Only this time, the subject matter - the libretto is written by Hugo von Hofmannsthal! - involves a marvellous combination of opera seria and opera buffa, clearly moving away from the genre of tragedy, so fully represented in Strauss's work by operas such as "Salome", "Elektra" and "The Egyptian Helen".

"Ariadne" is, after all, a musical comedy: to which Australian director Elijah Moshinsky - (who died in December 2021 from COVID) gave freshness and nerve at the MET in 1993. And which returned to the famous New York stage this year in a special cast, bringing together American artists around Norwegian soprano Lise Davidsen (Ariadne/Prima Donna): Isabel Leonard - one of the most highly regarded mezzo-sopranos at the MET (The Composer), soprano Brenda Rae (Zerbinetta), tenor Brandon Javonovich (Bacchus) and Polish-born conductor Marek Janovski - the latter conducting music by Richard Strauss again at the Metropolitan Opera House 36 years after his debut in loco with "Arabella" .

Opera by Richard Strauss, therefore, on Saturday - the 12th of March, at 8pm, on Opera Night - live from the Metropolitan Theatre in New York: "Ariadne on Naxos", with Lise Davidsen!

For commentary, we invited the internationally renowned soprano Laura Tătulescu to the studio of Radio România Muzical.