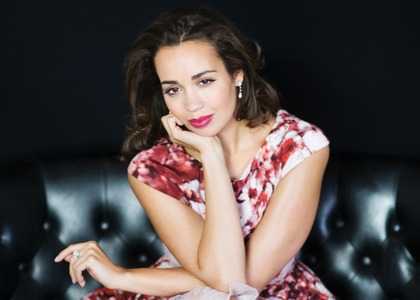 Soprano Nadine Sierra - “Made for Opera”

On the 4th of March this year, soprano Nadine Sierra's second solo album was officially released. Four years ago, the Portuguese-born soprano released her first solo album, signing an exclusive contract with Deutsche Grammophon & Decca Gold. "Nadine Sierra's childhood intuition - that she was born to sing opera - proved correct in every respect and is reflected in the title of her second solo album for Deutsche Grammophon." - reads the review of the record which bears the name "Made for Opera".

Recorded with the Italian Radio Symphony Orchestra and Capella Cracoviensis under the direction of Riccardo Frizza, the album not only reflects Nadine Sierra's mastery of the bel canto technique and a rich range of vocal nuances, but the soprano demonstrates her knowledge of the psychology of the characters she performs, such as Violetta Valery, Lucia di Lammermoor and Juliet; heroines destroyed by the social conventions of the time and the impossibility of choosing their own destiny. This has a personal resonance for the Portuguese-born soprano, whose grandmother, gifted with a formidable voice, had been prevented by her family from pursuing a career in opera. Her wings were broken and, like most women of her background and generation, she became a respectable housewife and nothing more. Today Nadine Sierra thanks her mother who gave her all the support she needed as she embarked on her artistic journey. The making of this album also owes much to three inspirational women in the life of the Portuguese-born soprano: Teresa Stratas and Renata Scotto, the stars of the first production Nadine Sierra saw at the age of ten - Boema directed by the famous director Franco Zeffirelli - a videotape her mother borrowed from the local library in For Lauderdale, Florida, and Marilyn Horne, who became her mentor a few years later. "I learned from these exceptional women," Nadine Sierra recalls, "that I had to have everything it took - dedication, hardship, sacrifice, perseverance, patience and pure devotion - to be 'made for opera.'