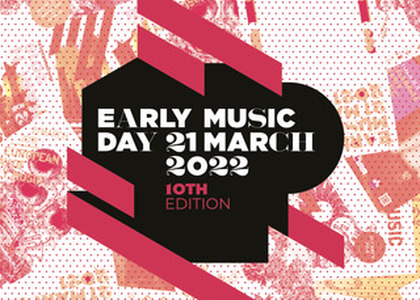 March 21st is a special day for lovers of early music, it is dedicated to the anniversary of this amazing heritage that includes over 1000 years of musical history, from the Middle Ages until the late Baroque (1750), but also with some insertions oriented towards classicism in this edition. It is no coincidence that March 21st was proposed as an anniversary date, it being the birthday of Johann Sebastian Bach, who through an unprecedented musical work made definitive and unparalleled statements in the Baroque world, taken over and recognized for their value by the generations of the nineteenth century too, starting with Felix Mendelssohn-Bartholdy and continuing with the spectacular restoration that begun in the twentieth century.

Early Music Day is celebrated in Europe and not only since 2013 through REMA, an organization which promotes this ancient European musical history through concerts and other events. Looking at the map published on the earlymusicday.eu website, a much richer one compared to the last two years, there can be observed a concentration of events in Italy and France, naturally, as these are the countries where the most important specialized schools appeared. They are followed by England, the Netherlands, Germany, Spain, Portugal, Belgium, Finland, Switzerland, and as an extrapolation, the United States, Japan, Taiwan and Israel, countries that did not go through this phenomenon, but that join it out of solidarity, also announced their participation. South-eastern Europe, with the exception of Poland and Hungary, is predominantly silent, possibly in the light of the tragic events we are going through.

As always, REMA has appointed an ambassador for this event, namely the countertenor Carlo Vistoli, a voice that has distinguished itself since 2015 at the Academy "Le jardin des voix" founded by the ensemble "Les Arts Florissants". The Italian artist has collaborated with the most important specialized ensembles - Les Arts Florissants, Cappella Mediterranea, The English Baroque Soloists, Concerto Italiano, Les Musiciens du Louvre, Il Pomo d'Oro, both in concerts and in lyrical productions. He will be present on our frequencies too, with several arias from the latest released albums.

Going through the statement of the Italian artist as ambassador of the Early Music Day, 10th edition: "Why and how does Early Music still speak to us today, from hundreds of years away? I always felt that one of its most fascinating peculiarities is to allow the interpreters to express themselves in many ways, and to offer, even within the boundaries of the practicing rules, the possibility to personalize the performance even more than in later repertoires. The more we discover, the more we realize that there are buried treasures that just wait to reveal themselves… To have been designated as Ambassador of Early Music Day is not only a great honour for me but also an encouragement to go even further on this road, connecting people, especially younger generations, through the passion for Early Music. Thus, they can discover an entire world that opens mind and heart to new and unexplored emotions, or better "affetti", as we say with an old but timeless expression. There occurs the feeling that a piece composed 300 years ago could have been written nowadays, because it still has something important to say to us: that's the magic of Music!"

What can you listen to on Radio România Muzical on this topic? Pages by Jean Philippe Rameau, Antonio Vivaldi, Henry Purcell, Luigi da Mancia, one of the authors promoted on this Day of Early Music in a concert in Lyon, Eustache du Caurroy - an Orlando di Lasso of France, Giovanni Girolamo Kapsberger and of course Johann Sebastian Bach.

I would also like to point out the beginning of the second edition of the Early Music Day Festival - a virtual festival that will take place between March 21st and 27th, with a selection offered by partners from all over the world. There are concerts scheduled to be watched on the earlymusicday.eu website, the festival section, during 24 hours from the displayed date, starting with the one given by countertenor Carlo Vistoli, ambassador of Early Music Day, together with the Berlin Academy of Early Music, on the first day of the festival.