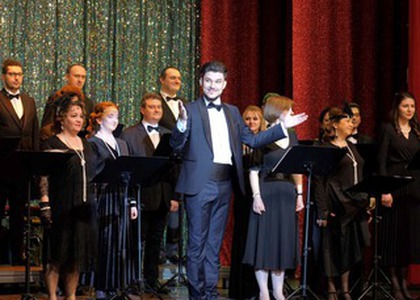 On Sunday, March 27th, 2022, at 7 pm, the audience present in the great hall of the "Constantin Tănase" Magazine Theater enjoyed a show based on a unique concept, reviving a long gone era - the interwar era. The event was supported by the "Prelude" Chamber Choir, conducted by Andrei Stănculescu. Guests: Flavian Chitic (piano) and Iulia Bitta (percussion). Famous pages from the interwar period - arranged for mixed choir by the composer Ioan Dobrinescu - gathered under the name of the Suite "Bucharest interwar" (in the version for mixed choir), as well as the works Neznakomkaby Yuri Falik and Libertango by Astor Weather in Piazzolla. The second part of the program took us a few decades later, in 1960s America, to the resounding chords of the choral suites in The Sound of Music by Richard Rodgers and West Side Story by Leonard Bernstein (arr. Mac Huff).

The host of the event, Liviu Pețu, producer of Radio România Muzical and member of the ensemble, described in a few words the concept of the show and made a brief presentation of the choir, as well as the artistic career of conductor Andrei Stănculescu, highlighting his attention to more faithful rendition of the real intentions of the composers.

The appearance of the choir on stage was spectacular and surprising because the girls did not wear the well-known costumes that the ensemble accustomed us to, but were dressed in black dresses accessorized with feathers and pearls in the spirit of the '20s, to complete the atmosphere of the first part of the show. The concert started with the song Vrei să ne-ntâlnim sâmbătă seară?, the soprano game giving voice to the main theme. The percussion punctuated the tango rhythm for better fluidity, while the girls had a musical dialogue with the tenors and bass. The rallentando at the end gave a special stability to the whole fragment. Next, the crystalline sound of the choir was revealed in the songFetițe dulci ca-n București, composed by Ion Vasilescu, the atmosphere being a jovial one, without overlooking the technical precision. A pair of dancers - Elena Duicu and Robert Andrei Vladescu - appeared on stage and illustrated the romance in dance steps. The communication of the musicians was made even more difficult and the coordination is all the more remarkable as the two dancers were right between the ensemble and the conductor. Inima-i un telefon was musically materialized as a telephone call between boys and girls, clearly delimiting each voice. The lively chords invited to the dance, the spectators barely refraining from getting up from their seats. This work contrasted with the fluidity and tenderness present in the song Noapte bună, Mimi. The beginning of the tenors was warm and bound. Interesting dissonances gave some very welcome tension rises. Also, when it had the theme, the bass played a beautiful phrase, and the sopranos concluded with the watermark of their voice, showing a special homogeneity. The conductor was jovial and relaxed, with precise, natural movements, carrying with him the charisma that has already become so familiar to us. The suite ended with the song Iubesc femeia, which had many dynamic changes, and the bass glissandos gave a lot of charm, being performed according to the musical context. The vocal lines developed individually to eventually merge. This suite is defined by a rich sound complexity, while maintaining the specific character of each piece and skillfully preserving the scent of the era it evokes. The first part of the concert ended in tango steps, with the work already consecrated in the ensemble's repertoire - Neznakomkaby Yuri Falik - and Libertango by Astor Piazzolla (arr. Lincoln Andrade), the mysterious atmosphere being completed by the sensual movements of the two dancers.

After enthusiastic applause, the "Prelude" Choir made a incursion into the musicals of the '60s in the United States with the choral suite from "The Sound of Music" by Richard Rodgers, with the piano being played by Flavian Chitic. Fragments such as "The sound of music", "My favorite things", "Climb every mountain" or the famous "Do re mi" resounded nostalgically, to the obvious joy of the spectators. The evening ended with Leonard Bernstein's "West Side Story" Choral Suite, the arrangement for the mixed choir by Mac Huff. Here were some voices in the choir, the soprano Alina Bosovici who softly sang the theme of the duet "Tonight" and the baritone Marius Nine who played Tony. The accuracy and sensitivity with which he sang must be appreciated, given that the score is designed for a tenor voice. The suite took us through the famous themes of the musical, reaching "I feel pretty" where Raluca Stoica gave voice to Maria, and then unleashed in the typical Puerto Rican commotion in "America", following Victoria Burdea, who led her line expressively and gently. The conductor Andrei Stănculescu anticipated very well the agogic changes, the alternation of the parts being very smooth. Although the altoplayers had more personality in the end, the sopranos concluded precisely and clearly with the other parties. The audience burst intoa pplause.

On a funnier note, the atmosphere that enveloped us throughout the evening, the artists from the "Prelude" Choir prepared a musical arrangement made by their conductor, Andrei Stănculescu, for the song Să nu te superi că te-njur!, once played by Jean Moscopol. The work drew many smiles and admiring looks, being sprinkled here and there with the full speeches of some of the members of the ensemble. The processing ha spreserved the character of the original work, with smooth increases, modulations that gave vitality to the sound discourse, strengthened by the passionate interpretation. The arrangement presented in the first absolute audition had a little more substance and vivacity than the original song. In fact, a spectator from his early youth concluded what happened on stage, whispering to his wife that Andrei Stănculescu "is a perfect musician, I know!"

As the loud applause did not stop, the "Prelude" Chamber Choir once again performed "Fetițe dulci ca-n București", and the conductor asked permission to attend from the hall, letting the musicians he had prepared so thoroughly evolve alone.

The romantic atmosphere impressed everyone, giving them the hope that choral music in Romania has more and more vast perspectives and can be found in the most unique poses.