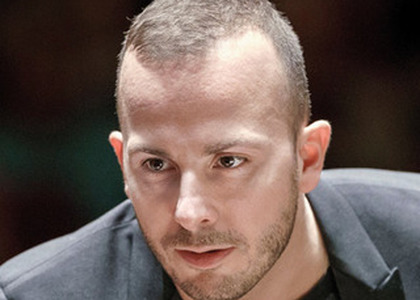 Broadcast live at România Muzical on Friday, 6th of May, from 9 PM, the Munich event is one of a kind. The season of Bavarian Radio Symphony Orchestra announces a very interesting programme, having two leading guests of current international music life in the foreground. In fact, it is the second concert performed in Munchen, from a series which will continue until the 14th of May in Vienna, Hamburg, Frankfurt, Luxembourg, and then at Philharmonie de Paris.

Out of courtesy, let's begin with the Italian pianist Beatrice Rana - a familiar presence in the live programmes broadcasted by Radio România Muzical, from the important platforms of Europe... Beatrice Rana (born on January 1993) sang with great devotion, eagerly waiting (as she confessed in an interview) for the auditors to return to their seats, as the seasons began to resume with difficulty, to really feel the direct artistic communication! Beatrice Rana, a multiple winner of difficult international piano competitions, frequently opts for the romantic concert universe (without avoiding - for example - Baroque or modern, even contemporary music).

In this series of appearances with the Bavarian Broadcasting Symphony Orchestra, Beatrice Rana brings to the forefront a score rarely present on posters: The Concerto in A minor op.7 written by Clara Wieck - who also performed it at the first audition in Leipzig, under the baton of Felix Mendelssohn, when he was only 14 years old... The last part of the work was done first, and will be just a "Konzertsatz", the orchestration of which seems to have contributed with guidance and the disciple of the author's father, named... Robert Schumann, who became her husband in 1840.

About the conductor of Canadian origin Yannick Nezet-Seguin was written in the most appreciative tone of voice in the past years on different medridians of he globe:

"You have the whole world at the pick of your fingers!"

" The largest power generator now on the international podium!"

"He is a great Master! " or "his art is already knocking at the gates of Heaven!"

If we list only a few of the functions and titles he already holds at the head of several prestigious music groups, we can easily pinpoint the dimension to which the career of this 47-year-old conductor (and pianist) has already risen: he is music director at the Philadelphia Orchestra(since 2012) and at the Metropolitan Opera in New York (since 2018), he is an artistic director and principal conductor of the most important symphony ensemble in Montreal (since 2000), honorary conductor of the Rotterdam Philharmonic (after being a director for a decade). musical orchestra), honorary member of the Chamber Orchestra of Europe ... An impressive record is his discography, which includes an extensive list of romantic symphonic integrals, but also many contemporary creations.

As a symbolic reminder of the connection between the Schumann family and Johannes Brahms, Yannick Nezet-Seguin decided to join Clara Schumann's concertante opposite (as the great pianist of the 19th century is much better known) the Third Symphony of the composer born in Hamburg in May 1833 (year in which it is stated in some studies that the lines of the last part of the concert written by a child prodigy, who was born in 1819) were originally made ...

A new opus is scheduled for the opening of the evening, commissioned by several current prestigious orchestras (including BRSO) to the Danish composer Hans Abrahamsen, who will turn 7 years old this year. The title of the paper is in French: "Vers le silence"; the four elements are mentioned as sources of inspiration - fire, earth, wind and water - which are accompanied by the fifth: transcendent nature.