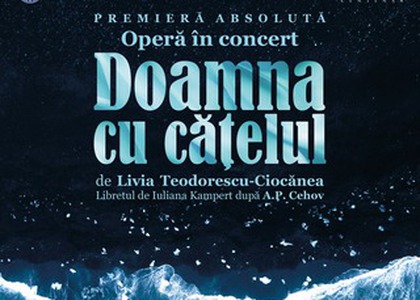 A grand premiere is an opportunity ( and quite a rare one) to listen without prejudice. Livia Teodorescu-Ciocanea's opera "The Lady with the Dog", performed in concert on Sunday, the 7th of May 2022, at the Bucharest Opera House gave us this opportunity. The title and the subject of the opera are taken from Chekhov's short story in four scenes, which in the vision of Livia Teodorescu and of the libretto composer Iuliana Kampert become the four acts of the opera.

"The opera the Lady with the Dog is a metaphor of love, of internal turmoil, of tenderness, of happiness ruined by convenience and prejudice"- this is how the author describes her lirical creation.

One of the most important themes of the story is adultery- Dmitri Dmitrici Gurov and Anna Sergheevna, both unhappily married, meet in Ialta, where they're both vacationing alone. They have a short affair, after which they part ways-he to Moscow, she to a small town near Sankt Petersburg. For him it was just another affair, for her- something earth-shattering that she blames herself for. The action is presented from the male perspective of Dimitri, who realizes that his relatioship with Anna wasn't just a casual fling, but that he was truly in love for the first time in his life. He goes to Anna's town in order to find her. They find each other again at the local theater, they hide from view, and she, shocked to see him, promises to visit him in Moskow. The last act finds them living two separate lives- the marital life and the true and happy one. How will they manage to handle the prejudice of society, just how? This is the question the opera ends with, while still offering the hope of a brighter future, with the onset of the new century ( which is wrongly marked as the year 1900), during the Epilogue ( the epilogue does not exist in Chekhov's short story).

The librettoclosely follows the original text, dating from 1899, which is a bit amplified, to emphasise certain ideas as well as Chekhov's voice. Some of the moments from the inital text are set in different places than the original; there are also characters borrowed from other writtings by Chekhov( Nikolai from The Wife, Vasiliev from A nervous breakdown and Pavel from About love). Moreover, Chekhov himself is present in the opera, and he interacts with his characters. Another significant change is the replacement, during the third act, of the play which the protagonist is going to see. In Chekhov's story that play is The Gheisha, but in the opera it becomes Chekhov's The Seagull. This is an opportunity to bring on the stage three of the most important characters- Nina ( interpreted by the soprano Mihaela Stanciu), Treplev( interpreted by the actor Tudor Morgovan) and Arkadina ( played by the actress Victoria Radu).

The score is the result of an order of the Union of Romanian Composers and Musicologists, composed between 2012 and 2015; it was revised and enlarged in 2021, at the suggestion of the director Alexander Hausvater , who contributed to the scenario with stage directions and even with a couple new scenes, as the composer declares.

The night was musicaly conducted by the Vlad Conta who, for three hours and a half ( without counting the two breaks) held in his hands the Opera House Orchestra, a large ensemble that contains an exotic instrument as well, the theremin ( Gabriel Almasi played it), the Opera House Choir ( trained by Daniel Jinga and Adrian Ionescu) as well as the soloists. The music, roughly speaking, can be included in a so-called Neo-Romantic zone, that is turbulent, sometimes ironic ( but in the bitter and not the humorous sense of the word), that reproduces very well the heavy atmosphere, the heat and the boredom in Ialta ( during the first act), as well as the cold of Moskow at the end. The composer gave the first violin many solos, at different points of the opera( the night of the premiere the violin player was Radu Dunca). Among the best orchestral and/or choral moments we can count, in my opinion, the opening of the opera, that conveys the atmoshere of vespers in a Russian church, with bells, an accappela choir with a soloist ( the baritone Vasile Chisiu as Chekhov), in old Slavonic, as well as the choir of the sailors returning in Ialta, the scenes with fiddler music in the second act and Anna's aria, among others.

In the main roles, Gurov and Anna, we've heard on Sunday the tenor Adrian Dumitru( with a beautiful range but with a voice that is too small to handle such a big orchestra) and the soprano Veronica Anusca, whose singing I have admired very much; she has the advantage of a metallic and powerfull voice that could be heard very well in the uncomfortable context for soloists). The whole cast did very well. Among them are the bass- baritone Ion Dimieru, the bartione Adrian Marcan, the tenor Andrei Lazar( who also had an extensive solo); alongside them, in the opera the Lady with the dog by Livia Teodorescu Ciocanea have sang the mezzo-soprano Claudia Caia-as Irina Gurov, Dimitri's wife( a voice that unfortunately lacks the low register required by this score), the sopranos Ana Cebotari, Alexandra Manole, the mezzo-sopranos Andreea Grigore and Florentina Picus-who gave life to the four ladies with which Gurov talks during the first act, in Ialta, when his status as a ladies man and an adventurer is established.

The narrator was played by the actorMarius Bodochi, who, in the absence of decor and stage movement, had to present at the begining of every act a summary of the action.

I am convinced that not only I, but the majority of the ones present at the premiere, are waiting for the staged version of this opera ( as far as I understood this was the inital plan of the institution). Thus, we'll have the chance to soack up more easily the ideas of the author.