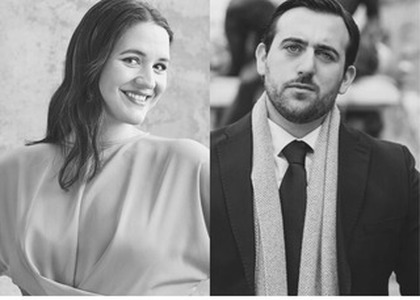 On Tuesday, May 10th, 2022, an extraordinary charity concert took place at the Bucharest National Opera. The event was organized at the initiative of Maria Mot, general manager of the MWA impresario agency, through which two outstanding soloists - soprano Lise Davidsen and tenor Freddie De Tommaso, together with conductor José Miguel Pérez Sierra, took the stage of the Bucharest Opera.

Our colleague, Florica Jalbă, was also present at the concert:

Two stars of opera music, the Norwegian soprano Lise Davidsen and the Anglo-Italian tenor Freddie De Tommaso were the protagonists of last night's concert at the Bucharest National Opera. Lise Davidsen is the winner of the 2015 edition of the competition Operalia, and Freddie De Tommaso won the 2018 International Singing Competition Francisco Viñas. The event, made for the benefit of the Regional Institute of Oncology in Iasi, by fully donating the revenues from the tickets sold, represented the fulfillment of a wish of Maria Mot, artistic manager at her own impresario agency in London. Since 2018, Maria Mot had the intention to organize a charity concert, in support of the medical institution where her mother had palliative care, and the two soloists she represents supported the idea, so that their participation in last night's concert was pro-bono. Along with Lise Davidsen and Freddie De Tommaso, the third guest of the evening was the Spanish conductor José Miguel Pérez Sierra. The directorial concept belonged to Rares Zaharia, who also proposed the organization of this event during the Bucharest Opera season. I admired Lise Davidsen performing, in the first part of the concerto, Elisabeth's aria from act I of Wagner's opera "Tannhauser", and Easter Anthem from the opera "Cavalleria rusticana" by Mascagni, then at the end of the second part returned for the first aria of Lady Macbeth from "Macbeth" by Verdi, and as an encore offered Vissi d'arte, the famous aria in Puccini's "Tosca". There were moments of grace, in which I could appreciate the voice that seems to be from another world, completely distinct from everything that currently exists in the world of lyrics. Lise Davidsen impresses with a disturbing expressiveness and incredible equality of registers. She holds a voice with an impressive volume, but which she leads remarkably with naturalness and lightness. At just 28 years old, Freddie De Tommaso is already one of the most important tenors of the moment, addressing roles of maturity. Last night he delighted us with arias from "Lombarzii", "Simon Boccanegra" and "Macbeth" by Verdi, "Arleziana" by Cilea, "Cavalleria rusticana" by Mascagni, "Carmen" by Bizet, and at the encore, E lucevan le stelle from "Tosca" by Puccini. A very beautiful voice, which impressed with its cantability and sensitivity, conveying a lot of emotion. The choir and orchestra of the Opera, under the careful direction of José Miguel Pérez Sierra, competed. In the evening's program, the director Rares Zaharia also included two video materials - recorded dialogues with Maria Mot who shared the sad story related to the loss of her mother, which led to the organization of this concert, but also with doctor Vladimir Poroch, head of the Palliative Care Department at the Regional Institute of Oncology in Iasi, who offered details about the specifics of this medical discipline. A special moment was the collage that presented the photographs of the relatives of the employees of the Bucharest Opera, who lost their lives due to cancer, presented while Lise Davidsen, the choir and the orchestra were in progressing Easter hymn. Soon, at Radio România Muzical you will be able to listen to the recording of the concert from this memorable evening.

The loyalmelomans of the opera were present last night in the hall. Among them, Florin Ionescu:

"We are extremely lucky! It's an enormous chance tonight. Lise Davidsen is an absolute phenomenon! I am a man who has seen thousands of shows so far, but such a voice has not been given to me to hear. I went from the Metropolitan Opera to the Sydney Opera, but that's once a century. And we're lucky to be contemporary with this voice, to be able to hear it live. As for Freddie de Tommaso, he is a tenor of a sensitivity that we rarely have the opportunity to hear. It goes a lot on the spectacular, it goes a lot on the effects, to be impressive through technique, through agility, through strength, but it conveys emotion first of all."

"We are extremely privileged to have attended this concert, to have had the opportunity to listen to Lise Davidsen and Freddie de Tommaso here in Bucharest. I think we could close our eyes and imagine that we are anywhere in the world where these people sing, are applauded and appreciated. We thank the National Opera and we thank Maria Mot for the opportunity to listen to them and I hope that every person who has enjoyed this concert will not forget to be in the same measure alongside the cause that this concert has held tonight."

Being yesterday in Bucharest, the baritone Florin Estefan, manager of the Romanian National Opera in Cluj-Napoca chose to be among the spectators:

"First of all, I will say that the initiative to support the Regional Institute of Oncology in Iasi is extraordinary. Maria Mot's initiative is welcome and it is impressive that this concert was made in Bucharest and not in Iasi. The fact that it was made here, in Bucharest, denotes a special altruism of the Opera's management. As for the singers, it was an extraordinary evening both through the musical direction of master Sierra and through the two singers - Freddie de Tommaso and Lise Davidsen, who overwhelmed us with her impressive voice in "Lady Macbeth", in "Tannhauser". I wonder what partners this soprano should have, who are enough as a voice besides the gift she has."

Chronicle made by Florica Jalbă
Translated by Beatrice-Andreea Porumb,
University of Bucharest, Faculty of Foreign Languages and Literatures, MTTLC, year I
Corrected by Silvia Petrescu
Return to archived Events