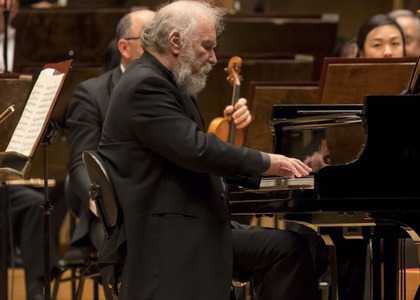 This spring brought the end of a destiny that gave a new dimension to the art of piano. The pianist Radu Lupu passed away on Sunday 17th of April, this year, at the age of 76, at his home in Lausanne. A performer with a mythical stature, as discreet and unassuming as he appeared. A pianist reserved in gestures and words, boundless in the subtlety and spontaneity of his interpretation and in the intangible delicacy of his piano playing. A masterful interpreter of the music of Schubert, Beethoven, sublime in Mozart, fully finding himself in Schumann and Brahms, less frequently, but the more surprising for those who had the chance to listen to him live, and in Debussy, Franck, Janacek and Bartok, a repertoire which had become increasingly selective over the years, like his public occurrences.

Since 1996 he started declaring his refusal to record on disc,one of the few exceptions being a Schubert disc of four-hand piano works with Daniel Barnboim,. He was also extremely selective when choosing concert halls, preferring the intimate ones, where he showed up quiet, shy, avoiding any eye contact with the audience and sitting on a backed chair.

For health reasons, Radu Lupu announced in 2019 his retirementfrom the concert life, his last recitals revealing us an artist whose genius penetrated beyond the sound universe that our ears can decipher, reaching a form of "sublime decantation", as the Swiss chroniclers remarked. A "patriarch of the clavichord" revered by the public and by his fellow musicians.

"Radu Lupu's art is one of purity, in a sublime murmur. When listening to him you discover the infinite delicacy of the touch at the fine border where the sonorous vibration borders on the inaudible,stretched on the thread of silence" (Sylvie Bonier, LeTemps, January 2016).

To understand the breadth of his interpretative personality, however, the asceticism of the last years of the Romanian pianist's career must be seen in the light of his first triumphs, the Van Cliburn Competition, for example, in which he was awarded the gold medal in 1996, a prize that placed him in the line of the great virtuosos of the piano scene, as a true disciple of Heinrich Neuhaus under whose guidance other titans of the keyboard, such as Sviatoslav Richer and Emil Gilels, were formed. Member of the Van Cliburn jury, the Spanish pianist Alicia de Larrocha called the young Romanian pianist a genius. The impeccable technique, the infinite range of nuances, the orchestral timbre of the piano under his fingers, the spontaneity of vision remain the constants of Radu Lupu's art throughout his career. However, he quickly abandoned the explosively virtuosic scores, along the lines of Prokofiev's Concerto Two, with which he conquered the jury of the prestigious TEXAS competition, in favour of music scores with reflective notes. In a 2007 interview, he said "I would have liked to build my career playing only slow movements".

5 encounters with the art of the regretted pianist Radu Lupu, in the 5 star Concerts show!

At Radio România Muzical, we invite you to highlight some moments of his career in three consecutive editions of the show 5 star Concerts, starting from Monday, 16th of May 2022: In Memoriam pianist RADU LUPU, five memorable concerts performed on European stages:

·2005 (20 May, Leiszhalle Hamburg): Robert Schumann - Concerto op. 54 in A minor for piano and orchestra (Symphony Orchestra of the German Broadcasting Corporation Hamburg and conductor Manfred Honeck).