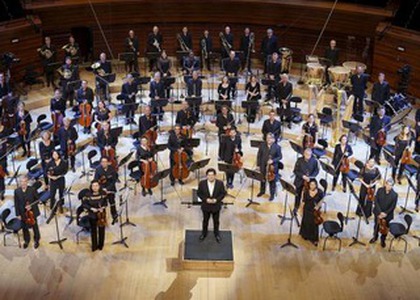 LIVE from Paris: the conductor Cristian Măcelaru and the violin player Augustin Hadelich

Through the live transmission of the program offered by The National Orchestra of France on the 19th of May under the baton of Cristian Măcelaru, we will witness an event charged with other meanings, beyond the ones stricly related to the program of this prestigious institution: it is a night of French music included in the series organised by Radio France and France Musique in the events ocasioned by the presidency of the Council of the European Union that France has until the end of June. In this context, the National Library of France brings the public a special presentation of the autographed manuscript of "The sea- 3 symphonic sketches for orchestra"- Claude Debussy's score that appears on the poster for this night.

The refined picturesque of Claude Debussy's pages is preceded by the energy explosion of a real "șlagăr", an oldie of the concert repertoire for violin, as it was ( and still is in many parts of the world) the "Spanish Symphony" by Edouard Lalo... The soloist of this piece dedicated to the virtuoso Pablo de Sarasate ( who interpreted it at the premiere in Paris in 1875) is a multiple winner of international competitions, whose career it's briliantly shaped not only by the talent he exhibited early in life, but also by his extraordinary willpower to overcome the problems brought upon him by the accident he suffered when he was 15 years old...Augustin Hadelich- descendent of a German family estabilished on a farm in Italy- he suffered severe burns during a fire set off by an explosion in his home; after months in the hospital and treatment in Germany ( about a year of break from his studies, as he was saying in an interview) he was given little change to resume his ascension in the violin world, but, slowly, his efforts have paid off and he continued his studies in the United States. Concerts on famous stages, album recordings, colaborations with famous ensembles and renowed conductors, all complete the list of acheivements this musician born in 1984 has.

In a promo filmed for this concert, the conductor Cristian Macelaru emphasised that the opening program is intended to be an homage to the french composer Philippe Manoury, who will celebrate ( exactly a month from now) 7 decades of life; on the poster there is an artwork from 2017, with a title that- today- could be considered prescient: " Lock down"- a musical piece for two drummers and orchestra, in which, at the end, the performers will turn to...flutes, not only to the spectacular timber of an impressive arsenal of instruments!

If Lalo and Debussy will appear in the program offered by Orchestre National de France, the conductor Cristian Măcelaru and the violin player Augustin Hadelich in Compiegne-on Friday, in Bourges on Sunday the french contemporary score will also be replaced by the Romanian Rapsody no 1 by George Enescu!

On Thursday, the 19th of May, at 21 o'clock, on The European Stage: The National Orchestra of France, presenting three different stances of the French musical scenery, under the sign of interpretative responsability.