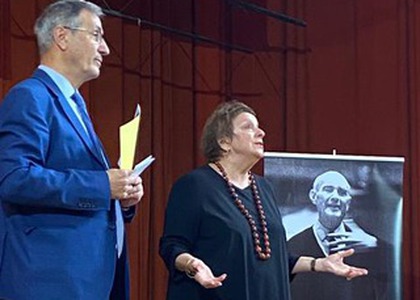 The XXVIII edition of the "George Georgescu" International Competition for Musical Interpretation ended on Sunday, May 15th, with an event that brought on the stage of the Children's Palace in Tulcea young finalists of the competition.

"It takes a village to raise a child," says a proverb usually attributed to African cultures. I would extrapolate from this that the development of a generation of musicians requires an entire country, at least. Parents, teachers and, of course, students from all over the country were present in Tulcea between May 12th-15th, where the XXVIII edition of the International Competition for Musical Interpretation "George Georgescu" was held. On Sunday, May 15th, on the stage of the Children's Palace in Tulcea, the Competition Gala took place, the public being made up of young musicians, their parents, teachers, but also the members of the jury - chaired by Professor Marin Cazacu, PhD, from whom we learned how this edition of the competition took place.

"A post-pandemic edition, in which the enthusiasm and love for the instrument are stronger, because everything that could not be achieved in the last two years had such a strong load that everything we listened to proved to us that music will never be missing from people's souls. Of course, from the first grade to the twelfth grade - as this competition has the profile - starting from the piano, which is a very well-known instrument all over the world, the violin, too, which is present quite often, but also the other instruments... for the first time for example, I listened in this edition to the harp, clarinet at such a level... In fact, the winner of this edition is a young clarinetist from Bucharest - xi-th grade, Ioana Tomescu. So, we were very happy to listen both to those who expected us, in a way, to prove very high qualities and level, but also those who started, from the second, third grade, even with less known instruments, to prove to us that music has so many palettes and so many facets that it is worth loving all these instruments." - Marin Cazacu

Of the musicians who performed at the gala, the strongest impression was undoubtedly made by clarinetist Ioana Tomescu, a student in the XI grade and winner of this year's grand prize. Theme with variations by Jean Francaix was the song with which the singer captured the attention of the audience, both through flawless technique and musicality - skills that the audience and the jury appreciated: "It's a big cloud! A lot of emotions, a very good opportunity and it was very nice. I've been studying these pieces for a long time; it's the program we did this year. They are pieces of technique, very demanded in clarinet in the international repertoire, so we made them for competitions and because they are required."

"Mr. Cazacu, who always has very good ideas, who encourages young people, gives them possibilities, evoked the fact that in the school from Tulcea there are no classes for all instruments. Now, there are too many pianists, too many violinists. There are not enough cellists, blowers, etc.m.d. So, together we decided that a cello class would be created in Tulcea. And then, immediately, I was extremely enthusiastic and I said that I was going to help the school, that is, I was going to give the school three working tools, a cello 1/4, 2/4 and 3/4 cello, to be able to work." - Ioana Georgescu

The young pianist Tudor Matei Jora was awarded the "Tudor Maria Valentino" Diploma, which bears the name of a very young pianist who died too early. The attribute common to all the young people who could be listened to at the gala would be that they have all the necessary data to become excellent musicians, assuming that they remain as studious as I imagine they have been until now. In any case, this year's edition of the "George Georgescu" International Competition for Musical Interpretation was a success, both in terms of organization - which is why the competition team deserves to be congratulated - and musically, where congratulations should be addressed to musicians, teachers and parents.