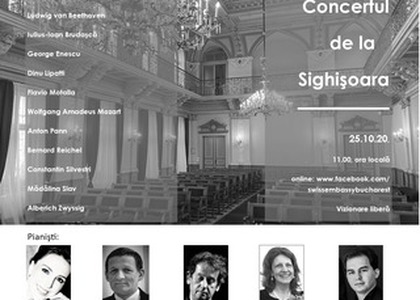 The concert that we announce represents an homage brought to the Academia Sighișoara, the longest standing cultural collaboration between Switzerland and Romania, a summer school for young musicians from all over the world, as well as an influential international festival.

Beyond the physical distancing, music reminds us that we are united through human connection. It gives us comfort, it helps us survive, it cultivates our emotions and our strength to push forward.

The COVID-19 pandemic entailed numerous canceled live concerts and artistic events. The Sighișoara concert reunites five acclaimed pianists, coming from different regions of Romania, in a solidary event and in the faith for musicians and music enthusiasts in these trying times.

We announce a concert meant to represent an homage brought to the Academia Sighișoara, the longest-lasting cultural collaboration between Switzerland and Romania, a summer school for young musicians from all over the world, as well as an influential international festival. It has been established by the violinistAlexandruGavrilovici in 1993 and, for the first time in twenty-seven years, it has been forced to cancel its events due to the pandemic's effects.

The concert was organized by the Swiss Embassy in Bucharest, in collaboration with the Swiss Association 'Cultura Viva Sighișoara'. The event is hosted by Sighișoara's city hall and is taking place under the sponsorship of the Ministry of Foreign Affairs and Romanian National Commission for UNESCO. It is assisted by the District Hub Association, the Swiss Association in Romania, the Chamber of Commerce Switzerland-Romania and the Swiss Sponsors' Fund.

The concert will be held in the Great Hall of Sighișoara's city hall building, in the presence of the Swiss ambassador Arthur Mattli, the Mayor of Sighișoara and the General Secretary of Romanian National Commission for UNESCO, Mrs. Daniela Zaharia.

There will be a live transmission on the Embassy's Facebook page: www.facebook.com/swissembassybucharest


Translated by Ioana Grigoruță,
University of Bucharest, Faculty of Foreign Languages and Literatures, MTTLC, year I
Corrected by Silvia Petrescu
Return to Events