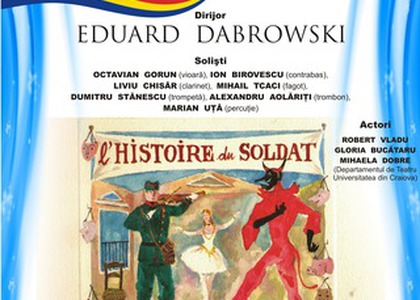 "The Soldier's Story", a masterpiece of the 20th century music, on Friday, at the 'Oltenia' Philharmonic Craiova

STRAVINSKI
composed the work"THE SOLDIER'S STORY"during the First World War, when he was in Switzerland with his friend, the Swiss prose writer Charles Ferdinand RAMUZ. The music retains a specific Russian intonation. Ramuz created a story - a parable inspired by the collection of Russian fairytales by Alexander Afanasiev. A soldier sells his devil's violin in exchange for a book that predicts the future of the world's finances. The violin, the motif of the faustic fair, represents the soldier's soul and the currency.

With the recited and danced action, accompanied by orchestral musical paintings, different from the opera genre, Stravinsky broke all the canons, creating an atypical form of performance, difficult to fit into a certain genre. With a small budget, Stravinsky envisioned a "concentrated" orchestra with only seven instruments.

EDUARD DABROWSKI is a young Romanian composer and conductor born in Brașov, Transylvania. He is best known for the music of the documentary films Sw!m and Banatul Montan, movies whose soundtrack is available worldwide on all music platforms on all continents. In addition, he also has music for various commercials, trailers or even music for concert scenes.

We are waiting for you in the concert hall of the "Oltenia" Craiova Philharmonic at a surprising show that combines tango rhythms, marches, waltzes or choirs, giving birth to a homogeneous and original work. The concert will take place with the public in the hall, with the limitation of seats to a maximum of 120 peoplea ndcompliance with medical safety measures: music lovers' access on separate input-output circuits, temperature measurement, hand sanitizer, wearing a face mask, physical distance of at least 2 meters between spectators.