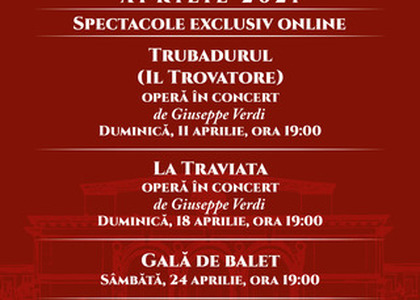 Online season, in the program of the Bucharest National Opera from April

The Bucharest National Opera is preparing for the public in April an online season with titles from its current repertoire. The faithful audience is invited to support the artists of the first lyrical scene of the country in a virtual approach and to watch a series of unique cultural products by concept and quality that will be broadcast every Sunday of the week. The works in concert and the Extraordinary Ballet Gala are our proposal in the call for unity of artists and the public to cross together this period of trial for the Romanian cultural space. We are waiting for you, therefore, to be with us and we invite you to enjoy together online the emotion transmitted through sound and movement. The shows will be recorded during the week they are scheduled to air.

Verdi's "Troubadour" is one of his most intense, dramatic and, paradoxically, accessible works to the public. The title has been a great success since its premiere in Rome in 1853 and has been preserved since then in the seasons of all great works around the world, which validates once again the value of the Italian composer's score, but also the public interest in it. work.

The show brings to the public's attention the emotional story of a courtesan who lived in Paris in the first half of the 19th century under the name of Marie Duplessis and who marked the existence of artists such as composer Franz Liszt and writer Alexandre Dumas-son. The latter, as a sign of posthumous homage, chose her as muse for his famous novel "The Lady with the Camellias", which served Giuseppe Verdi as a source of inspiration for his work, "La Traviata", whose first performance at Bucharest took place in 1856, a few years after the world premiere at the La Fenice Theater in Venice.

The "Extraordinary Ballet Gala" is intended to be a celebration at the highest level, the art of dance. In this show you will be able to watch highly successful choreographic moments, from famous shows of the universal classical repertoire such as: "Swan Lake", "Don Quixote", "The Corsair", "Giselle", "Sleeping Beauty", " The Nutcracker". The first dancers, soloists and the ballet ensemble of the Bucharest National Opera return online with the public in a demonstration of talent, mastery and excellence.

One of the funniest works ever written, "The Barber of Seville" gained worldwide notoriety with the help of the character Figaro, the Spanish barber, and his famous cavatine "Largo al Factotum". Gioachino Rossini's creation has been a resounding success since its absolute premiere in 1816, when it was presented under the original title "Almaviva". The humorous atmosphere of the show is outlined around Count Almaviva and Figaro but also their attempts to impress Rosina.