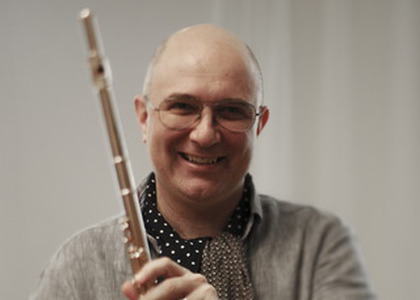 Inspired by the pandemic, the creation of the composer Dan Dediu World`s First Fear will be performed for the first time at the Radio Hall

On Friday, June 25th, 2021 (from 7 pm), the closing concert of the 2020-2021 season will take place on the stage of the Radio Hall, supported by the NATIONAL RADIO ORCHESTRA, under the baton of the appreciated conductor NICOLAE MOLDOVEANU. The event will be an opportunity to applaud the well-known flutist ION-BOGDAN ȘTEFĂNESCU(soloist of the "George Enescu" Philharmonic), who plays on a "jewel" instrument: an 18k gold flute, made by the Japanese company Muramatsu. The closing concert of the season will mark the absolute premiereof the concert for flute and orchestra "World's First Fear" ("First World Fear"), a creation recently composed by DAN DEDIU.

"Composed during the coronavirus pandemic, in 2020, and dedicated to the flutist Ion Bogdan Ștefănescu, The Concerto for Flute and Orchestra op.172adopts its name of World's First Fear - a World phrase from a phrase forged by the French thinker Bernard-Henri Lévy in In this sense, the play is a musical meditation on the mentality of today's humanity, in search of a striking identity, without hope and belief in any transcendent, but with the secret illusion that all is not lost and that some kind of providence somehow protects us from evil and trouble, now and in the future. The seven parts of the concert propose a suite of miniatures grafted with elements from contemporary film strategies - 1. Bacchanale, 2. Pastoral cynique, 3. Imitations alluvionnaires, 4. Skinny Tunes, 5. Lisnafi, 6. Ave Maria (avec Bach et Gounod ), 7. Interrupted Lockdown- what can be seen as episodes of a "season" TV series, in which the musical themes are "roles". That is why the current concert is a "music with a trunk", meaning that it carries behind it, like a snail, the whole history. "- confesses the composer DAN DEDIU about his creation.

The program of the evening at the Radio Hall also includes "Sighs", a work by the British composer EDWARD ELGARand the Suite "Pulcinella" by STRAVINSKI, whose passing into existence is 50 years old.

The flutist ION BOGDAN ŞTEFĂNESCU is a soloist of the "George Enescu" Philharmonic, prof.univ.dr. at the flute department within the National University of Music Bucharest and soloist of the "Banatul" Philharmonic from Timișoara.Since 1983, when he made his debut on the stage of the Romanian Athenaeum and until now, Ion Bogdan Ştefănescu has carried out an intense artistic activity that has consisted of over a thousand recitals and concerts, in Romania and abroad.

The flutist Ion Bogdan Ştefănescu is a laureate of several national and international competitions and has also received important and honorable distinctions for his artistic merits. Ion Bogdan Ştefănescu is a founding member of the ensembles "Procontemporania" and "Profil" and founder of the ensembles "Barock Orchestra" and "Flaut Power". He is also a member of the "Contraste" Trio and the "George Enescu" Wind Quintet.

Tickets are available online, on iabilet.ro, and at the box office of the Radio Hall. Tickets can also be purchased at Flanco stores, Rompetrol gas stations, Metro Unirii 1, "Music" stores, IQ BOX, Uman and on Selfpay terminals. Online, you can pay by card, via Paypal, Sodexo cultural ticket cards, on the invoice at Vodafone or Orange or refund by Fan Courier, anywhere in the country.