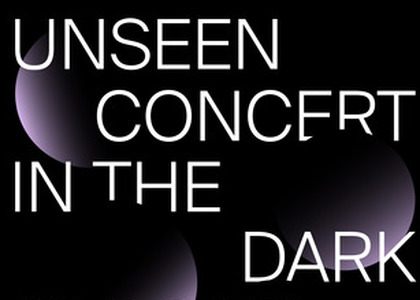 UNSEEN.CONCERT IN THE DARK brings the unique experience of classical music in the dark to Târgu-Mureș, in an extraordinary cello and piano recital

The Russian-born cellist Makcim Fernandez Samodaiev and the pianist Monica Florescu, two of the most appreciated chamber music artists, perform works by Bach, Vivaldi, Scarlatti, Pärt and Maria Theresia von Paradisfor the audience in Târgu-Mureș, in an extraordinary classical music recital with lights off on stage and in the hall, inviting listeners to access pure emotion. The recital takes place on November 23rd at 19:00, in the main hall of the Palace of Culture of the Târgu-Mureș State Philharmonic, closing the event Unseen.Concert in the Dark, and the price of a ticket is 20 lei.

Unseen. Concert in the Darkinvites the public of Târgu-Mureș to a unique experience in Romania: classical music performed and listened to in the dark. The lights go out to ignite the imagination and involve listeners in an introspective journey. On the stage of the Târgu-Mureș State Philharmonic on November 23rd, at 7 pm, the Russian-born cellist Makcim Fernandez Samodaiev and the pianist Monica Florescu - concert artists of the Sibiu State Philharmonic and founders of the well-known Florescu-Fernandez & Friends chamber music season. The evening's programme includes well-known works from the classical music repertoire: Johann Sebastian Bach's Suite No. 1 for solo cello in G Major, Domenico Scarlatti's Four Piano Sonatas, Antonio Vivaldi's Improvisation on a Symphony Theme, Arvo Pärt's Mirrors in Mirrors and Maria Theresia von Paradis' Siciliana. At the end of the recital, a free dialogue will challenge those present to express their emotions during the experience, encouraging confessionality. The audience will dialogue with artists Makcim Fernandez Samodaiev and Monica Florescu, as well as with Cristina Bobe, visual artist and author of the concept "Unseen", and the dialogue will be moderated by Ruxandra Miuți.

"We designed this framework so that music can be more easily internalized. The concerts in the dark are an invitation to an experience of intimacy with sound and, beyond that, with ourselves, with the unseen and unknown emotions within us. Darkness amplifies the listening experience, attention is decoupled from screens and technology and is directed entirely towards sound, the only remaining connection between the artist on the unseen stage and the inner universe of each viewer. The Unseen experience is a challenge to us all and an opportunity to discover how to feel more deeply and how to find the courage to talk about our emotions, about what makes us vulnerable, music being the glue between us, but also the starting point for the discussion that completes each concert in the dark, an open space for honesty and confessionality. I would like this unconventional form of supporting and listening to a concert to become, in time, as natural an alternative as possible to the recitals offered by Romanian philharmonics", said Cristina Bobe, visual artist and author of the "Unseen" concept.

"Sound is just to be listened to and not judged. We wanted to generate sound out of nothing, as if it takes shape from the mind, to stimulate the ear and to conquer silence. This event is challenging both technically and emotionally for us as performers. The experience of playing in the dark gave us a tremendous freedom. We accessed a different side of performance," say the cellist Makcim Fernandez Samodaiev and the pianist Monica Florescu.

Tickets for the UNSEEN.CONCERT IN THE DARK event in Târgu-Mureș are on sale on theEventbook network (https://bit.ly/unseenbilet_23noiembrie) and at the box office of the Târgu-Mureș State Philharmonic.

The recital in Târgu-Mureș concludes the second edition of Unseen.Concert in the Dark 2021, during which renowned Romanian and international classical music artists such as pianist Florian Mitrea performed classical music in the dark in Brasov and Timișoara. In addition to the events for the general public, an extraordinary series of recitals were dedicated to the blind public, in partnership with the Association of the Blind in Romania - Brasov and Timis-Caras-Severin branches. They were performed by cellist Makcim Fernandez Samodaiev and pianist Monica Florescu.

About UNSEEN.CONCERT IN THE DARK

UNSEEN. CONCERT IN THE DARK debuted as an event in 2019, with a series of recitals on Bach music performed by violinist Valentin Șerban, laureate of the George Enescu International Contest, enjoying an extraordinary success. The concerts in the dark started from the Artera Gallery (Bucharest), travelled to 11 other alternative spaces in Romania (Petrila Mine, Mother's Museum, Căpâlnaș Psychiatric Hospital, fortified churches in RoșiaMontană, Cinșor, Peșteana, a shed in the village of Șomartin etc. ) and ended with an extraordinary recital at the Sibiu State Philharmonic, which reached a record number of spectators for a chamber concert, with over 500 tickets sold out a month before the concert.

He was born in the former USSR in Volgograd and grew up in Havana, Cuba. He is a graduate of the Royal Conservatory of Music in Antwerp, Belgium, specialising in soloist-concertist. He has performed in countries such as Belgium, the Netherlands, Spain, France, Switzerland, Germany, Mexico, Cuba, the United States and Romania, and since 2015 he is soloist of the Sibiu State Philharmonic. In addition to his activity as a soloist and member of the Sibiu State Philharmonic, he is also intensively involved in chamber music concerts, which is why in 2015, in Sibiu, together with pianist Monica Florescu, he created the chamber music season "Florescu-Fernandez & Friends".

A multifaceted musician with 20 years of concert activity as a soloist with symphony orchestras and in chamber music recitals both in Romania and abroad (Belgium, Mexico, Holland, France, Germany, Italy, Sweden, England, Switzerland). He graduated from the National University of Music in Bucharest and the Royal Conservatory of Antwerp, Belgium. He has performed in renowned halls such as Bozar (Palais des Beaux Arts) Brussels; National Arts Centre (CNA) Mexico City; Sala "Tlaqna" Xalapa, Veracruz, Mexico; De Singel in Antwerp; De Bijloke in Gent; Sala "Thalia" in Sibiu and AteneulRomân in Bucharest. She is laureate and finalist of the 55th edition of the "Maria Canals" competition, together with the group "Spirale Piano Trio". Throughout her career, she has collaborated with various renowned artists including Thomas Kakuska, AlexandreRabinovitch-Barakovsky, Alexander Ivashkin and Renaud Capuçon.

Cristina Bobe, visual artist and author of the concept "Unseen"

She studied philosophy at the University of Bucharest and photography at the National University of Arts Bucharest. She is known for her photographs in the medical field, as well as for the creative ideas behind unique initiatives in the Romanian cultural space, such as the photographic project "Gentle Violence", exhibited at the Brukenthal National Museum in two editions ("The Heart" and "Faces of Change") - an approach of documentation and artistic exploration of open heart surgery and plastic surgery; Artera gallery in Bucharest - a multidisciplinary space created to explore the connections between art and health/body/medicine; the "Unseen" concept, which proposes the only classical music concerts in Romania, performed in complete darkness.

The access rules to the concert hall will be in accordance with the rules in force. Access will be granted one hour before the start of the performance. The audience present will occupy 30% of the hall's capacity. Protective masks must be worn throughout the event. The mask must cover the mouth and nose. When entering the concert hall, the audience will be asked to present an ID card and the official proof of SARS-CoV-2 vaccination (minimum 10 days after completion of the vaccination scheme).