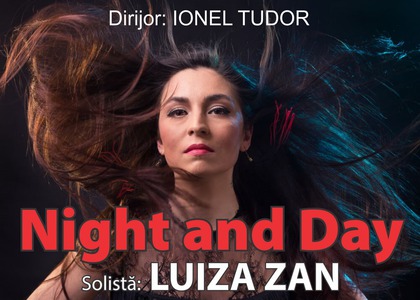 Concert and album launch at the Radio Hall: Luiza Dan – “Night and Day”

The first jazz concert on the Radio Hall's stage in this season (2021-2022) is a special event which you must not miss! On Thursday, 25th of November (from 19:00), LUIZA ZAN - one of today's most appreciated feminine voices from the Romanian jazz - will sing alongside BIG BAND RADIO, which is led by the well known conductor and composer IONEL TUDOR.

Suggestively titled "Night and Day", the concert is conceived with the occasion of the release of the artist's eponymous album, the CD being realized by the Radio Home Publishing House.

I criticize myself in a harsh way. I don't usually listen to my discographic productions out of fear that I might undermine their value through my perfectionist vision.

But the current album perfectly offers the energetic emanation of each person who was present in the hall on the night of the concert - each sound of instrument from the big band, each person's breath in the public can be felt on this album, thanks to the mastery of the sound engineer, mr. Calin Gibescu, to the professionalism and enthusiasm of the Big Band Radio and to the maestro Ionel Tudor's skill of handling the conductor's baton.

I hope that you, the person who's holding this disc in your hand, will feel even for a little bit the fragility of the emotion with which the musicians welcome you here, from the first note to the last drop of air which was spilled on the Radio Hall's stage in February 2019 - says Luiza Zan about her album.

On the Radio Hall's stage, you'll listen to the songs included in the "Night and Day" CD, such as Cherobee, Almost Like Being In Love, How High the Moon, Black Coffee, The Lake, Angel Eyes. The CD even contains creations made by Luiza Zan, alongside well known scores of the genre. The title of the album is given by the American composer Cole Poster's score "Night and Day", about which he said that it was inspired by an Islamic call to prayer which he heard during a trip to Morocco.

The singer will address a few things about her creation to the public and the album will be available for sale in the Radio Hall's lobby. Because of reasons determined by the pandemic restrictions, the organizing of an autograph session won't be possible. But the Home of Radio Editure has prepared a surprise for the fans: the albums which will be available for sale on the night of the event will have Luiza Zan and Ionel Tudor's signatures.

In 2014, LUIZA ZAN won the second prize at the Shure Jazz Voice Competition, during the jazz festival from Montreux, Switzerland, which is the oldest festival in Europe and one of the most acclaimed in the world. The year of 2004 brought her career another important recognition: the first prize at the Golden Deer festival, the interpretation section, alongside the Slang troop.

Luiza Zan graduated from the George Enescu Arts University from Iasi and also she experienced the position of teacher - between 2008 - 2010, she taught vocal jazz at the National Musical University of Bucharest and between 2010 - 2014, she held the vocal jazz course during the Icon Arts musical camp. She studied jazz with the American saxophonist Rick Condit and the American pianist Armen Donelian.

Luiza Zan has also composed movie soundtracks for productions such as Carambol, The Happy Circus ( an HBO production ) and Maria ( nominated at the "best documentary film" category at the Lucarno Festival - 2013 ).

The access in the Radio Hall will only be permitted by respecting the legal regulations in force. The wearing of the mask is mandatory and the public's access in the hall of the concert ( 30% of the maximum capacity ) will be permitted by presenting the proof of being vaccinated or having gone through the illness, which is only realized through the EU digital certificate on COVID, available at the https://certificat-covid.gov.ro/ address, whose verification is the responsibility of Radio Romania's staff, through the mobile verification app "Check DCC". For more details about the access, you can visit the official site https://www.orchestreradio.ro/ .

The tickets are available in the online system on iabilet.ro. The tickets are also available in the Flanco shops, the Rompetrol petrol stations, the Unirii Subway 1, the "Muzica" shops, IQ BOX, Uman and the Selfpay terminals. You can purchase them online by using the card, through Paypal, Sodexo cultural tickets cards, on the invoice at Vodafone or Orange, or repayment through Fan Courier, anywhere in the country.

The concert will be broadcast live on the airwaves, on all the Radio Romania Cultural and Radio România Muzical frequencies, and on live streaming on the Internet, on the two radio stations' sites.