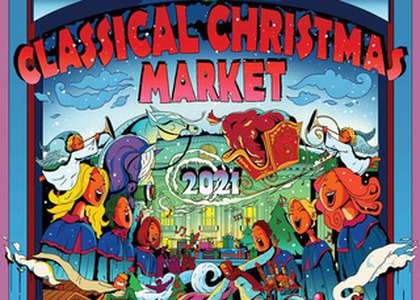 For the first time in a hundred years, the Bucharest National Opera will be hosting a Christmas Fair. Classical Christmas Market will be open to the public between the 3rd and the 31st of December 2021 outside on the National Opera terrace in the heart of Bucharest (70-72 MihaiKogălniceanu Boulevard).

Organised by two leading Romanian cultural institutions who are active in their promotion of classical music and education through music, the new Christmas Fair will offer visitors of all ages a high quality event. The fair will take place during the winter holiday season, and through its impressive presentation, it will offer a diverse and enticing selection.

Classical Christmas Market will take place on a 12.000m2 area and will include story-like decorations and activities all around the skating rink - the Fair's main attraction. The public will also be able to enjoy the carollers' special stage which has been organised for the children's shows and concerts by Cantus Mundi National Programme. Even more, the fair will include The Elves' Workshopsfor the little ones, amazing sleigh rides over the skating rink, rides on the OCC (Children's Comic Opera) Express Train, horse-drawn sleigh rides, the traditional candy houses and many others surprises, all of them alongside excellent music.

Together with our partners at Bucharest National Opera and with support from Children's Comic Opera and ROMSILVA, we wanted to add to the joy and magic of the winter holidays with an experience that is at once educational and fun and to 'invite' good music to lead this very loved month in a story-like setting. Classical Christmas Market will give children and adults alike a piece of Christmas magic and the authentic and familiar holiday feeling, the sense of safety and belonging, especially during these difficult times. - said Emil Pantelimon, the manager of the Madrigal - Marin Constantin Chamber Choir.

Bucharest National Opera, an institution under the Ministry of Culture, is the most important stage in Romania that's dedicated to musical and choreographic performances. Established a century ago, in 1921, Bucharest National Opera evolved from the Romanian Opera Company established in 1885 by George Stephănescuwhich originally ran its shows at the National Theatre. The first show took place on December 8th 1921 with Wagner's Lohengrinand conducted by the great composer George Enescu - a historical moment in the history of Romanian culture. This year, also on December 8th, Silviu Purcărete will be directing the hundred year old anniversary of this performance, under the same title and with an internationally renowned cast.

Since 2011, Madrigal Choir has run the Cantus Mundi National Programme , the largest Romanian programme for children's social integration through music, initiated by maestro Ion Marin, and currently united over 1.680 choirs and over 60.000 children in Romania and the diaspora.


Translated by Carla Bețianu,
University of Bucharest, Faculty of Foreign Languages and Literatures, MTTLC, year I
Corrected by Silvia Petrescu
Return to Events