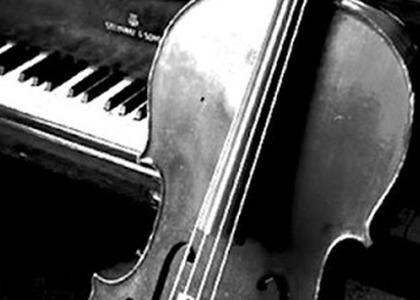 Tuesday night's season again offers a meeting with two young musicians who have gained fame through outstanding achievements. Cellist Izabela Ghergu is a student at the National University of Music in Bucharest, part of Professor Marin Cazacu's class. The pianist Gabriel Gâțan attended the bachelor's and master's courses at the same prestigious educational institution, in the class of professor Viniciu Moroianu. The two musicians have already become known through the awards they have won at important national and international competitions.

Izabela Ghergu was a former Scholar of the Royal Margaret Foundation of Romania, in the Young Talents program (2015-2017), of the Adriana and Martin Sternin Foundation (2013-2020) and of the SoNoRo Association, in the SoNoRo Interferences program (2017). She also participates in the ConnectArts Project of the Isvor Cultural Association (2018); METRIC Project, Erasmus + (Glasgow, 2018); COOLsound Project (2018); PerformArt Project, UNMB (2019); Music Lab Project (2020); Young Musicians Project, Ambassadors of the National University of Music Bucharest (2020).

Gabriel Gâțan benefited from the Excellence Scholarship offered by UNMB for significant artistic achievements twice, in 2018 and in 2021. In December 2019, he was invited to sing in the series of classical music concerts from Saint Martin in The Fields - Trafalgar Square, London, made in partnership with ICR. He also collaborated with the Hungarian Cultural Institutes, giving piano recitals at their headquarters in Paris and London in 2017 and 2018. At the International Competition "George Enescu", 2021 edition, he was official accompanist in the violin and cello sections, being their partner on scene in the Enescu works imposed on the laureates with the first and third prizes for cello and the second prize for violin.

On the evening of January 11th, Izabela Ghergu and Gabriel Gâțan will meet on the stage of the Small Hall of the Romanian Athenaeum where they will perform together for the first time, during the Season on Tuesday evening.

- From the Ticket Office of the Romanian Athenaeum

- Online, accessing the website www.fge.org.ro - "Calendar" section. Tickets once purchased are only refundable under the conditions provided by law.

Access to the hall of the Romanian Athenaeum is allowed "with the participation of the public up to 50% of the maximum capacity of the space, if all participants are persons vaccinated against SARS-CoV-2 virus and for whom 10 days have passed since the completion of the complete vaccination schedule or persons which is in the period from the 15th to the 180th day after the confirmation of SARS-CoV-2 infection and the wearing of the protective mask is ensured ". The verification of these conditions will be done before the access inside the Romanian Athenaeum.