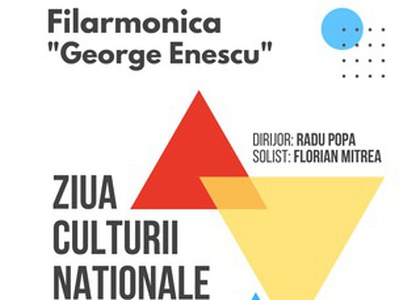 This Saturday, January 15th 2022, at 6:30 p.m., the National Culture Day will be celebrated by the "George Enescu" Philharmonic with an extraordinary concert, held in the Great Hall of the Romanian Athenaeum. The special event led by the conductor Radu Popa is organized in partnership with the Romanian Center of Music and in co-production with Radio Romania Musical. Soloist in Concerto No. 5, in E flat major, for piano and orchestra, Op. 73,The Imperial by Ludwig van Beethoven will be the pianist Florian Mitrea.

The program dedicated to the National Culture Day includes, along with Beethoven's masterpiece, significant works of Romanian music: Two Romanian Dances by Theodor Rogalski and the Mihai Viteazul Suite (selections) by Tiberiu Olah.

"Culture - the performance culture (Constantin Noica) - remains the decisive criterion that homologates and guarantees the building-intellectual value, the intelligence and spiritual authority of a nation. These values ​​give it respect, justify its proud dignity and aristocratic aura in the world," delcared Andrei Dimitriu, general director of the "George Enescu" Philharmonic.

The conductor Radu Popa is convinced that the return to culture remains the only option to maintain the spirit of our nation in the increasingly turbulent flow of contemporaneity. "This National Culture Day concert means finding Romanian culture in the universal cultural heritage by joining the spirits of Rogalski and Olah with that of the giant from Bonn - Beethoven. Beethoven's Imperial, in the context of our concert, is a universal musical offering to ruler Michael the Brave, present through the music of TiberiuOlah, who pays attention to the coronation of Michael the Braveand the arrival to Alba Iulia", the conductor underlined.

For the soloist Florian Mitrea, "The Imperial reaches that artistic sphere in which words become powerless and can no longer define the state we're in. It's a concert that we cannot talk about, but that we can live together, in the concert hall. I'm honored to return to the first stage of the country, the stage of the Romanian Athenaeum. Both Rogalski and Olah sum up the emblematic figure of the Romanian musician, with deep roots in the Romanian cultural ethos, but at the same time integrated in the international circuit of values, and Beethoven transcends both physical and temporal boundaries", the pianist specified.

Symphonic concert with the occasion of the National Culture Day

The Symphonic Orchestra of the "George Enescu" Philharmonic

Ludwig van Beethoven - Concert no. 5, in E flat major, for piano and orchestra, op. 73, The Imperial

The ticket prices are:

- From the Ticket Office of the Romanian Athenaeum

-Online, accessing the website www.fge.org.ro<http://www.fge.org.ro/> - the "Calendar" section. Tickets once purchased are only refundable under the conditions provided by law.

The access into the hall of the Romanian Athenaeum is allowed depending on the pandemic restrictions, "if all participants are persons vaccinated against the SARS-CoV-2 virus and for whom 10 days have passed since the finalization of the complete vaccination scheme or persons found in the period between the 15th and 180th day following the confirmation with the SARS-CoV-2 infection and the wearing of a protective mask is ensured". The verification of these conditions will be done before the access inside the Romanian Athenaeum.

RaduPopa was born in Bucharest, in 1969. He graduated in 1994 from the composition department (class of Prof. Dr. Adrian Iorgulescu), and in 1996 from the conducting-orchestra section (class of Prof. LudovicBács). He continued his musical training with a master's degree. Between 1999 and 2006, RaduPopaoccupied the positions of conductor and general director of the Giurgiu State Philharmonic, then, for a year, he worked as a permanent conductor at the "Oltenia" State Philharmonic from Craiova. He's been the permanent conductor at the "Banatul" State Philharmonic fromTimişoara since 2007. He started as a conductor in 1993, together with the "Oltenia" Philharmonic Orchestra from Craiova, then he carried out a rich activity as a guest of the Radio Chamber Orchestra from Bucharest, as well as of the Philharmonic Orchestras of Arad, Bacău, Bucharest, Cluj-Napoca, Craiova, Iaşi, Oradea, Ploieşti, Râmnicu-Vâlcea, Satu-Mare, Sibiu, Târgu-Mureş, Timişoara. He has toured in South Korea. As a conductor of the "Camerata Janacek" Chamber Orchestra, RaduPopa coordinated the production of The Magic Flute in Šumperk - Czech Republic (2002). At the "Transylvania" Philharmonic Orchestra in Cluj-Napoca, he gave a concert at the "George Enescu" International Festival in 2007. With the occasion of the collaboration between the Vienna State Opera and the "Banatul" Philharmonic, RaduPopa conducted in Timişoara an extraordinary concert given by soloists of the Vienna State Opera, the program including selections from the works Figaro's Wedding, Don Giovanni and Così fan tutte by W.A. Mozart.

Described by Martha Argerich as "an extraordinary rising pianist", Florian Mitrea has won the international piano competitions at Glasgow 2017, Saint-Priest 2017, Hamamatsu 2015, Munich ARD 2014 and is the winner of the Royal Overseas League Piano Competition. He was taught in Bucharest by the teachers Flavia Moldovan and Gabriela Enășescu. He won a scholarship at the Royal Academy of Music in London, in the class of Professor Diana Ketler, where he is currently professor within the Piano Faculty. He also teaches piano at the Purcell School for Young Musicians and is frequently invited to take master classes in Tokyo and Bucharest. In 2016 he became the Kawai Global Artist, and in 2018 he was awarded the title of Associate of the Royal Academy of Music. He has been based in the UK since 2008 and has performed in well-known venues such as Usher Hall (Edinburgh), Royal Concert Hall (Glasgow), Bridgewater Hall (Manchester), King's Place, St John Smith Square, Queen Elisabeth Hall and Saint-Martin-in-the-Fields (London). In 2018 he made his debut at the Lucerne and Edinburgh festivals. He was the lead singer of the Philharmonic Orchestra fromLondon, the Collegium Musicum from Basel. In early 2020, Florian Mitrea had his debut recital at the Bozar Hall in Brussels and undertook his first solo tour with the Royal Scottish Orchestra. The pianist has made recordings for BBC Radio 3, BBC Scotland, Südwest Rundfunk, Bayerischer Rundfunk, Radio France Musique, Radio Télévision Suisse and Radio România Muzical.