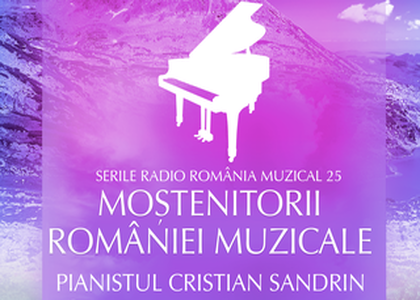 "The heirs of musical Romania". Recital given by pianist Cristian Sandrin

Goldberg Variations, a capital creation in music history, an emblematic opposite not only for the creation of the genius Johann Sebastian Bach, but for the entire music history, can be heard, played on the piano, after more than 20 years on a Bucharest stage.

And the one who gives life to this monumental opposite is the 28-year-old pianist, Cristian Sandrin, a graduate of the Royal Academy of Music in London and winner of numerous and important international competitions. Among the prizes obtained is the one for performing Bach's music at the 2019 edition of the Olga Kern International Piano Competition in New Mexico.

Over time, Cristian Sandrin has been supported by many foundations in the UK, known for their support of the most talented young musicians; he has performed in the most important British halls, but also in Paris, Berlin, Madrid, Venice, etc.

It can rarely be heard in Romania, however; and the project "Musical Romania's Heirs" brings home one of the great Romanian stages, the Radio Hall. This is also the purpose of the project, in general: to bring young Romanian musicians with a relevant international career to sing in recitals and at home, in events that can be heard live on Radio Romania Musical, and are also broadcast on European Union Radio Network.

The project started in 2018; So far, 20 recitals and concerts have been organized. The recitals in this project are aimed at a wide audience, with an accessible repertoire lasting one hour, without a break. Under the auspices of the same project, two albums were published by Casa Radio Publishing House, including evolutions from recitals.

In 2020, Radio România Muzical and Rotary Club Pipera also initiated the "Musical Romania Heirs" scholarship for young musicians aged between 16 and 24 years. The winners of the scholarship worth 4,000 euros were the pianist Cadmiel Boțac - in 2020 and the cellist Cornelius Zirbo - in 2021.

The June 9th recital is part of the series organized by Radio România Muzical on the occasion of its 25th anniversary. Radio România Muzical is still the only Romanian station dedicated to cult music, a valuable landmark, an intersection point between musicians and the public under the sign "Classical music for everyone".

For more than 110 years, Rotary, with more than 1.2 million professional members of all backgrounds, has been a global network of leaders working to contribute to communities around the world and inspire people everywhere for a sustainable society. Rotary Club Pipera provides financial support for the "Musical Heirs of Romania" project and actively promotes concerts, as an expression of concern for serving the community culturally, educationally, andinspirational. All funds raised by Rotary Club Pipera for the "Musical Romania Heirs" project are used exclusively to pay artists' fees and a portion of the cost of promoting the recitals. The public can be actively involved in supporting the project through donations to the Rotary Club Pipera account. Details on the active possibilities of involvement can be accessed on the facebook account facebook/rotaryclubpipera/.

Tickets for the Radio Hall recital on June 9th can be purchased exclusively online at www.iabilet.ro.


Translated by Georgiana-Carmen Rădulescu,
University of Bucharest, Faculty of Foreign Languages and Literatures, MTTLC, year I
Corrected by Silvia Petrescu
Return to Events