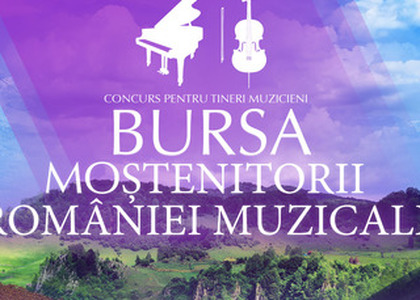 The results of the competition for the Musical Heirs of Romania grant, awarded by Radio România Muzical and Rotary Club Pipera

The "Musical Heirs of Romania" project, which started in 2018, has so far meant more than 20 recitals and concerts at Sala Radio in Bucharest, as well as in important cultural centres around the country, performed by young Romanian musicians with an important international career, but also two double CDs released in 2019 and 2021 by Casa Radio Publishing House.

From 2020, under the aegis of "Musical Heirs of Romania", a competition is organized for a grant worth 4000 euros, generously offered by the Rotary Club Pipera.

In 2022, 18 young musicians aged between 16 and 24 have entered the third edition of the "Musical Heirs of Romania" competition, with applications being submitted exclusively online. The jury that reviewed these applications is made up of personalities from the Romanian music scene: Ovidiu Andriș - interim manager of the "Banatul" Philharmonic in Timișoara, Cristina Comandașu - manager of Radio Romania Muzical, who initiated the project, Ioan Dragoș Dimitriu - manager of the Philharmonic in Brasov, Răsvan Dumitru - section leader of the "Transilvania" Philharmonic Orchestra in Cluj-Napoca, member of the Arcadia Quartet and director of "Arcadia Chamber Music Classes", Dan Popescu - delegate member from Rotary Club Pipera and composer, violist Răzvan Popovici - violist and executive director of the SoNoRo Festivals and Liliana Staicu - director of the Radio Orchestras and Choirs.

In 2022, the 4000 euro grant will go to pianist Kira Frolu, who will also give recitals at Sala Radio in Bucharest and at the Philharmonics of Timișoara and Brașov. She is also invited as soloist of the "Transilvania" Philharmonic Orchestra during the 2023-2024 season.

Considering the encouragement of as many Romanian talents as possible, and also taking into account the high professional level of the young musicians participating in the competition, the jury decided to grant other professional benefits to the competitors.

Violinist Maria Marica, pianist Nil Mladin and cellist Sofia Blându are invited to form a trio, as part of an Eufonia grant (Timișoara), with chamber concerts in Timișoara and Brașov. The trio is also invited to participate in the chamber music workshop and concerts at Arcadia CHAMBER MUSIC CLASSES this summer.

Radio România Muzical and Rotary Club Pipera would like to thank all the musicians who participated in the selection for the "Musical Heirs of Romania" grant. Romanian music has a future only thanks to those who carry on the tradition of high performance and professionalism.

Pianist Kira Frolu (22), is a student at the Royal Academy of Music in London, and from September 2022 onwards she has been accepted to study for a Master's degree at the same prestigious institution. Since the age of 15 she has studied at the Purcell School for Young Musicians in London. She is a winner of several national and international competitions; in 2020 she was a finalist in the competition for the "Musical Heirs of Romania" grant, giving her the opportunity to perform a recital and a concert with the Radio Chamber Orchestra, events taken over by the European Radio Union and broadcast by prestigious European stations such as BBC Radio 3. She made her orchestral concert debut at the age of 15; in 2021 she initiated a piano festival for young pianists, with the desire to inspire future pianists and bring back home part of the education received abroad.

Cellist Jan Sekaci (21), born in Oradea, studied in Cluj and Bucharest; he is currently a student at the Barenboim-Said Academy in Berlin. For the third consecutive year, he has been invited to participate in the class of excellence of cellist Gautier Capuçon, organised by the Louis Vuitton Foundation in Paris. Winner of national and international competitions, he is invited in the next season as soloist of the Prague Philharmonic Orchestra.

Soprano Aida Pascu (22) is a student at the National University of Music in Bucharest. She won the gold medal at the Vienna International Competition and the grand prize at the Grand Prix George Enescu in Paris. In autumn 2021 she participated in Raina Kabaivanska's masterclass in Sofia, where she had the opportunity to sing in concerts at the Plovdiv Opera and Sofia Opera. She is currently attending Raina Kabaivanska's vocal technique and performance masterclass at Istituto Superiore di Studi Musicali Vecchi Tonelli, where she received a scholarship from New Bugarian University. In 2021 she was a finalist in the "Musical Heirs of Romania" competition, performing concerts with the Radio Chamber Orchestra and the Brașov Philharmonic.

Violinist Ștefan Șimonca-Oprița (21), a student at the Hochschule für Musik in Saarbrücken, is a disciple of violinist David Grimal, who invited him to join the ensemble Les Dissonances, starting in 2017. Ștefan has been concertmaster of Les Dissonances at the concerts held during the Enescu Festival - 2021 edition, and has also performed as a soloist with David Grimal. His achievements include solo appearances with great stages of the international world; he stands out for his special interest in the music of George Enescu.

Clarinetist Petru Pane (17 years old) is a student of the "George Enescu" Music College in Bucharest and winner of numerous national and international competitions. He debuted in concerts with the orchestra as a soloist in 2018. In 2022, he gave his first national tour, performing Aaron Copland's Concerto for clarinet and orchestra.

Violinist Maria Marica (23) studied in Cluj-Napoca; she is currently studying at the Hochshule für Musik in Saarbrücken, in the class of Professor David Grimal. She has excelled in numerous national competitions and concerts on Romanian stages. As a finalist of the competition "Musical Heirs of Romania" - 2021, she was invited to perform a concert with the "Transilvania" Philharmonic Orchestra from Cluj.

Pianist Nil Mladin (22) studied in Bucharest; he is currently a student at the Royal Academy of Music in London. He has won prizes at national competitions and appeared on Romanian and international concert stages.

Cellist Sofia Blându (18 years old), a student of the "Dinu Lipatti" Music College in Bucharest, has just been included among the semi-finalists of the "George Enescu" International Competition - 2022. She has several national and international awards, as well as recital appearances; since 2017, she is a member of the Romanian Youth Orchestra.


Translated by Lenuța Bejenaru,
University of Bucharest, Faculty of Foreign Languages and Literatures, MTTLC, year I
Corrected by Silvia Petrescu
Return to Events