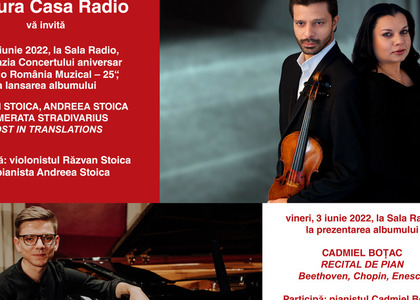 Casa Radio Publishing House invites the music audience to two releases of albums recently made in partnership with Radio România Muzical, followed by autograph sessions of the protagonists: Răzvan Stoica&Andreea Stoica and Cadmiel Boțac. The discographic events will take place at the Radio Hall on June 2nd and 3rd, 2022.

On this occasion, the violinist Răzvan Stoica will present to the viewers the album made together with Andreea Stoica and Orchestra Kamerata Stradivarius in 2021, at Casa Radio Publishing House. Its title, Lost in translations, suggests the stylistic multitude of the album: well-known but also original creations signed by Astor Piazzolla, George Enescu, Béla Bartók and Ciprian Porumbescu, a sound diversity "translated" by the performers through an original instrumental formula.

Charismatic violinist, Răzvan Stoica appears on the famous music stages, national and international, as a soloist, but also with his sister, the acclaimed pianist Andreea Stoica. The performer founded the "Kamerata Stradivarius" Orchestra in 2010, with the desire to reunite the sound of the eighteenth century with the contemporary musicality and highlight the exceptional quality of some instruments of value and ageclose to its Stradivarius violin.

Friday, June 3rd, at 7:00 p.m. -pianist Cadmiel Boțac will perform on the stage of the Radio Hall the famous Concert no. 2 for piano and orchestra by Sergei Rachmaninoff. During the break of the concert, in the Central Foyer, the artist together with Irina Cristina Vasilescu, producer at Radio România Muzical, will present the album Piano recital. Beethoven, Chopin, Enescu, recently published by Casa Radio Publishing House. At the end of the concert, Cadmiel Boțac will offer autographs.

Thanks to the awards given by Radio România Muzical to the young artist: the Special Prize, received in 2017 at the "Transylvanian International Piano Competition" in Brașov - which consisted of a session of special recordings, made a year later at Radio România, in the Concert Studio - and the "Heirs of Musical Romania" Scholarship, won in 2020, Casa Radio Publishing House dedicated this debut album to Cadmiel Boțac.

Cadmiel Boțac, a master student at the Academy of Music and Arts in Vienna, is one of the great artists who does not seek to stand out by exhibating his personality or by easily surprising the public. He puts above the show the letter of the score and a certain sobriety in the performance. But, as he testifies, it is a sobriety that comes intertwined with a contentment and a joy to make music, to be on stage so many times, to work with extraordinary people.

Details about the albums: www.edituracasaradio.ro

Albums "Răzvan Stoica, Andreea Stoica, Kamerata Stradivarius,Lost in translations" and "Cadmiel Boțac, Piano recital. Beethoven, Chopin, Enescu" can be purchased, at the price of the producer, from the Casa Radio Bookstore or by ordering online on the website of Casa Radio Publishing House: www.edituracasaradio.ro. They can also be purchased from distribution partners.


Translated by Beatrice-Andreea Porumb,
University of Bucharest, Faculty of Foreign Languages and Literatures, MTTLC, year I
Corrected by Silvia Petrescu
Return to Events