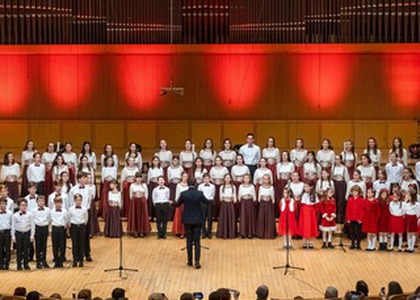 As you already know, Radio România Muzical is present at the events happening during the winter holidays, so as to record them for you. On the 10th of December, the Radio Children's Choir invited the public to the Radio Hall for the traditional Christmas concert.

Carols echoed on the 11th of December as well, interpreted by the Preludiu Chamber Choir under the roof of the Romanian Athenaeum. The ensemble celebrated five decades of activity this autumn. Another tradition, ever since 2009, it's the "Magic Winter" concert by the Romanian Youth Orchestra, conducted by Cristian Mandeal.

Every year, around the holidays preceeding th eBirth of Jesus Christ, the Radio Children's Choir offers the public a concert of carols and Christmas songs from the national and international repertoire. Under the baton of conductor Răzvan Rados, the little artists alternated Romanian Christmas Carols with songs from the international folklore. As usual, Magdalena Faur was playing piano.

Carols echoed on the 11th of December as well, interpreted bythe Preludiu Chamber Choir and conducted by Andrei Stanculescu under the roof of the Romanian Athenaeum. The concert was a tribute to conductor Voicu Enachescu as well. A leading figure of the Romanian choral art and the one who founded the ensemble five decades ago, the conductor departed from this world in November of this year.

On the 1st of November 1972, when Radio România is celebrated, the Preludiu Chamber Choir held their very first concert at the Romanian Student's Culture House in Bucharest. The Preludiu Chamber Choir, alongside their conductor Voicu Enachescu, followed an upward path, consolidated with each concert. They've acquired a repertoire of over 400 works of pre-classical, classical, and romantic music, religious songs, Romanian music and contemporary creations as well as works from the folklore of different peoples and carols. The baton passed to Andrei Stanculescu, who this autumn has lead the artists in a tour that marked fifty years of existence of the Preludiu Chamber Choir.

Another tradition, during the Winter Holidays, it's the "Magic Winter" concert held by the Romanian Youth Orchestra and their mentor- conductor Cristian Mandeal: " I am very glad to be able to work with this wonderful orchestra! It is one of the best youth orchestra in Europe..."- says Cristian Mandeal about the ensemble who, in 2018 celebrated 10 years of activity.

Today, the Romanian Youth Orchestra is a brand of national culture, rewarded by the public with their applauses in all the grand concert halls in Europe.