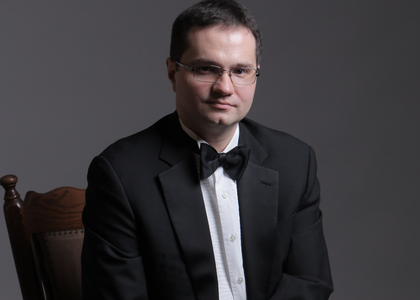 Mr. Toma Popovici, on the concert on Friday, 6th of May, you'll perform the Paganini themed Rhapsody by Serghei Rahmaninov, a song notorious for the difficulty of the piano's partiture. Tell us about the pianist's experience of singing this opposite.

First of all, I would like to talk a bit about this program's history with the National Radio Orchestra. Last year I received a phone call and was asked if I know the Musical Moment by Kirculescu. I said no, but this isn't a problem. But I had to sing something else too alongside it, and the concept of the concert had to include something about the romanian music, as well as something about cinema. And then I asked myself, what could I find something to sing about cinema. I thought and then remembered about a very famous movie, it's called "Somewhere in time", starring Christopher Reeve, in which the famous Re bemol major theme from this Rhapsody is like a leitmotif for the entire movie. And I suggested this song, besides the Musical Moment by Kirculescu. It was accepted with great enthusiasm. In the end, the concept of the concert's program was reconfigured and only the Rhapsody by Rahmaninov was left. You were talking about the pianistic difficulty. I don't know how difficult the pianistic part is, as for the ensemble part, of the piano's integration in the Orchestra, because it truly is a big symphony, from managing the piano-orchestra dialogue, as well as the participation of the whole orchestra and the coloring of all the instruments in the musical discourse. This song by Rahmaninov is a bit more recent, more modern and different from the previous opposites.

What's the atmosphere of the concerts with the National Radio Orchestra like from your point of view as a performer?

I've always been excited about being invited to the orchestras' trainings whether they were national, or in a room, with a full hall, an excited public, there's a lot of proffessionalism from the orchestra's side and from the conductors I collaborated with. It's always a celebration for me when I sing with the Radio Orchestras. I'm really looking forward to the next concert.