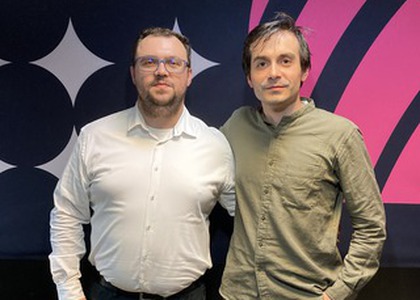 Sebastian Androne, Guest of the Week at Perpetuum Mobile

On Friday, May 6th, on the stage of the Radio Hall will be performed the work "Lan Huahua - The Dark Blue Flower" written by Sebastian Androne-Nakanishi, the first Romanian to be nominated Composer of the Year at the International Classical Music Awards Gala. The young musician was the Guest of the Week at Perpetuum mobile, May 4th edition, made by Lucian Haralambie.

I say hello to SebasianAndrone now, in the Radio România Muzical studio!

I'm glad to see you, I'm glad to hear you! I invited you to talk about the concert on Friday because, after a long time, your work "The Dark Blue Flower" will be performed in the first Romanian audition on the stage of the Radio Hall by the National Radio Orchestra conducted by Nicolae Moldoveanu. This morning was their first rehearsal. How did things work out?

First of all, I am very happy that this work is also presented in Romania. The collaboration with Mr. Moldoveanu was extraordinary. He has been living in Switzerland for a very long time and I got in touch a few weeks ago. It was extremely helpful to discuss the paper. He was also extremely friendly with me and somehow introduced me to the orchestra in a certain way ... it's not always easy to be received with too much warmth as a contemporary music composer, given that I write more difficult. But it helped him a lot and, clearly, our orchestra is made up of Latinos and the interpretation of my song was hotter than the Luxembourg or Shanghai version.

Let's make a history of this work. It wasperformed for the first time in Shanghai. In what year?

In 2017. The work was commissioned by the Shanghai Conservatory in collaboration with the Philharmonic, with the idea of ​​promoting its own culture. Eight composers were invited following a competition, and all eight composers had to write a paper of up to 10 minutes in which they used at least one Chinese instrument and each was given a traditional Chinese song. I received this song called "Lan Huahua" and used the erhu instrument - an instrument similar to the violin, viola. I also used it in the idea of ​​replacing it later with the solo violin, which happened and in this version we will listen to the work.

This song, "Lan Huahua" is a fairy tale in fact, a very sad fairy tale, in which this girl, Lan Huahua, is in love with a young man, she is like her. Of course, she is extremely beautiful; Lan Hua Hua means a dark blue flower, which is why I called the work that. It seems that this negative character, an ugly nobleman with a monkey face, intervened between them and kidnapped the girl, forced her to marry him and this led her to commit suicide (in one version), but even having a baby with him and then resorting to abortion.

At the same time, I had to write this paper when I was in Paris on a scholarship in two weeks. It was extremely intense, working 16 hours a day, and in one of the short breaks I had - like the ones with us - I went on Facebook to rinse my mind a little. But obviously my mind was ruminating, and at the same time I saw a video of a bird in Hawaii, the last specimen of that species, a male, singing with the idea of ​​attracting a female. Well, this song impressed me so much, a song that transposed the notes into a minor flat E almost similar to the one we find in our doines ... and I said that I have to introduce this song somehow. . And then, this disturbing story of Lan Huahua collides with a bird singing its song, the longing for a female who will never come again. That's what the paper is about. That was the first interpretation in China. I'm not very happy with how it was interpreted there for various reasons. But it was also sung in Luxembourg about two weeks ago and ...

April 21. I also want to talk about the first European audition. It took place at the International Classical Music Awards Gala, where you also won an award. But that's what we're talking about after you tell me how things went there, the meeting with the gala orchestra ...

Initially, the work was to be conducted by Adam Fischer, but the concert, given that it lasted 120 minutes, was really impossible and he had to choose somehow. And fortunately, I was assigned a very young conductor who is also a composer, Ivan Baumann, who is the Composer of the Year at ICMA in the last edition, if I'm not mistaken. The collaboration with him was also extremely fruitful. I got in touch with him a month ago and he was extremely prepared, everything was perfectly understood; given that he knew from experience that time with the orchestra would be extremely limited. We only had 55 minutes then. Well, even in those 55 minutes he managed to take the piece to a very high level, and all the instrumentalists to be at a level that, honestly, I did not expect considering that the work is not simple at all.

And back to the award we talked about earlier. You are the first Romanian to be named Composer of the Year at the ICMA Awards. It's been a few months since you heard the news, and from the official announcement, and from the first interview I did at the time. Now, how do you feel about this distinction?

Lucian, just like I told Mrs. Comandașu, whom I met there, the shock was great when I was there, among the giants. I am a young man like any other, I have maybe more talented colleagues, but I know that my work has been appreciated. And she was appreciated and put together with some huge personalities. It's overwhelming! But, at the same time, it doesn't occur to me because, no, it's a prize and somehow what this prize does for me is to confirm my effort, but also to put a kind of pressure, of responsibility in the idea that I have to keep up.

What are you working on now?

Initially we were working on about 4-5 consecutive projects, but we reached a burnout threshold and had to reduce it. Now I'm working on an opera. It is a very beautiful project, organized by the Goethe Institute, it is called "Opera in your pocket". I'm working on the music for a play in Constanz called Nosferatu, written by Stephan Teuwissen. And I'm still working on an animation; the type of animation is called expanded animation - it is projected on several walls, the projection practically surrounds you - and it will be projected in Zurich. It's a 3 minute animation. These are the projects I'm working on right now.

And is a return to Romania scheduled soon?

For now, no, because I also have a dissertation. I have to do my master's degree in Zurich and I may have a project in the summer, something related to ICon Arts.

Please, if you agree, an invitation for those who are listening to us now, to open the radios and on Friday, starting with 19.00, to listen to the concert of the National Radio Orchestra. I repeat, it will begin with your work "The Dark Blue Flower".

I would love to see as many of you there as possible! It is a work that demands a little more from the public, it has a lot to do with a fragmentation of the human soul on the verge of extreme suffering. At the same time, this fragmentation is put together with a high inner beauty, as described by Lan Huahua, this tragic character. It will be nice! I think it will be a work that will contrast nicely with the rest of the program. Here is a Chinese symphonic poem that will be contrasted very nicely by Sheherazada.