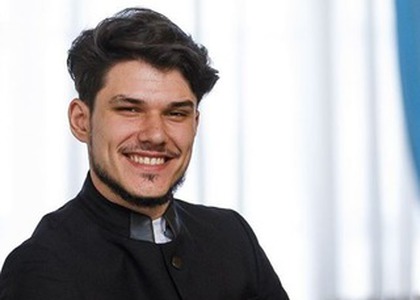 Andrei
Stănculescu, The Chamber Choir "Preludiu" is going to mark the National Day of Culture with a concert which will pe held on 16th of January at the Palace "The Romanian Youth". How does the significance of the moment mirror in the chosen repertoire?

I chose to present representatives pages insipred by the work of the poet Miahi Eminescu, but also Romanian music of folk origin from the creation of the great composers like Paul Constantinescu, Vasile Popovici, adding some contemporary composers, namely Adrian Pop and Valentin Gruescu. It is about the Four madrigals by Paul Constantinescu on verses by Mihai Eminescu, very well-known works, such as "Seara pe deal". From the creation of Adrian Pop, the famous "Colindă de pricină" ori "Vine hulpe", as it is known also, and from the creation of Valentin Gruescu, a work we have performed also during the Christams concert at the Athenaeum, but which suits very well the actual context, namely "Vis legănat". Adrian Chitic will play the piano.

In your opinion, are the verses of Mihai Eminescu still a source of inspiration for contemporary choral music?

For sure. Many, as you know, us, the conductors are in the same group woith composers and musicologists at the Conservatory and I can remember my colleagues who tried to write for the choir and were looking for inspiration in Eminescu's poetry. So, for composers nowadays too, at least, when they are prone to choral music, the first sources of inspiration are from Eminescu.

Ultimately, I would like to ask you about some of the most important activity landmarks of the Choir "Preludiu" for 2023.

There are many projects we are working on. I would prefer not to disclose the whole years, but I can give you some examples. In March, we are going to have a concert dedicated to the compositions of Josquin des Prés. We will have university professor Diego Fratelli from the "Conservatorio della Svizzera Italiana", who is among the few specialists regarding the Music of the Renaissance from Europe, as a guest. He will come to work with the Choir "Preludiu". This concert will be held at the cathedral "Sfântul Iosif". Another relevant event I think is the sequel of the project "Preludiu Interbelic", given the fact that last years we had a concert with the arrangements of Ioan Dobrinescu on interwar music tailored to choir, and this year we want to continue the project in a different context that we are going to present to the audience. Of course, we have some other projects in mind, but I would like to get to that point in order to say more, because every one of them has a wide description.