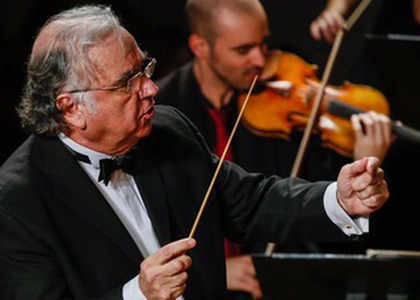 The disciple of the great Sergiu Celibidache, on the Ploiești Philharmonic stage

The maestro Jordi Mora, disciple of the great Sergiu Celibidache, will perform on the Paul Constantinescu Philharmonic stage on Thursday, 19th January, from 7 pm. The program will include the Ouverture "Manfred" op. 115 by R. Schumann, Concert nr. 5 in E-flat major, op.73 "Emperor Concerto" for the piano and the orchestra by L. van Beethoven and Symphony No. 5 in C minor, op 47 by D. Șostakovici. The soloist will be the pianist, Leonard Mihale.

The renowned Spanish conductor granted Irina Vasilescu, a Radio România Muzical creator, an extensive interview, that we invite you to go through hereafter.

Mister Mora, you are invited to conduct a concert at the Philharmonic from Ploiești, at the beginning of 2023. Given that this will be your first collaboration with a Romanian ensemble, I would like us to talk about your professional journey, in order to aid our audience but also musicians from all over the worlds to get to know you better. You were born in Barcelona, where you initially studied music too. Is your family also made up from musicians?

J.M: My parents were not professional musicians, but they loved music and musicians, and they even sang too; they were members of a multitude of choirs. Five of their six children became professional musicians. Thus, music was always present in our family life. At the age of 19, I went to Germany in order to continue my musical studies; I studied conducting, oboe and musicology, graduating from these majors at the Würzburg andMünchen Universities. My musicology thesis had at its core Beethoven's symphonies. One of the most notable moments of my life was meeting Sergiu Celibidache. It was 1973, I was at Stuttgart. After some years, I went to his rehearsals and his concerts at Stuttgart, then, in 1979, I went to those from München. He was my greatest teacher. I also studied conducting at München with him at the Philharmonic, and I also took Phenomenology courses.

Pedagogic activity is also very important to you. Over the years, you have taught not only in your native country, Spain, but also in Germany, Switzerland, Norway and Argentina. Are you passsing on Celibidache's ideas, the Phenomenology that he was talking about?

J.M: Yes, very much so! My whole pedagogic career is based on these ideas. It all comes down to a sort of extended, intricate and complex musical approach that requires plenty of time in order to be absorbed. All of my lessons - I am also a teacher at the Musical High School from Barcelona - has its roots in this Phenomenology concept.

I realize that there is still quite some interest towards this approach. There are a lot of voices that claim that Phenomenology is not something that can be taught, given that we are talking about a very personal concept, a unique one, as some would say, deeply rooted in Celibidache's personality; something that is very difficult to comprehend and absorb.

J.M: The idea is that information needs to be adapted each time. So, I never teach the way my teacher used to, decades ago, especially since things run much faster nowadays and there is not so much time at our disposal. And phenomenology is a way, not a purpose. After all, the most important thing is to know how to highlight well, to let the songs breathe, to convince musicians to listen to each other. These would, thus, be, some of the most notable things that a conductor should do, using a very methodical language. I, for one, never talk to the orchestras about Phenomenology, instead I put into practice the essence of what I have been taught. So the "Phenomenology" word isn't even mentioned. Notions always need to be adapted to the orchestras, to the students, to the different countries that you're teaching in. At the end, it all comes down to a way of making and understanding music. The phrase segmentation - this is the most notable aspect; then, the formal part (the beginning, the development, the climax and the end) - something that I hope that I will manage to achieve with the orchestra from Ploiești. These things bring us to the point where we are supposed to be.

Do you also find yourself against studio recordings, just as Celibidache, who claimed that music can only be made in a concert hall?

J.M: This is a consequence of a profound understanding of what music means. Music cannot be repeated, stored, it needs to take place only here and now. These are, after all, things that all musicians know. The live moment, from the concert hall, cannot be the same as the recording one. Through the process of printing there is always a loss of the strength of music, and dissimilarities are getting more and more prominent as you listen to it. Therefore, I am not against recordings, but they are more of a way to acquire information, given that real music can only happen in the moment of a concert.

An important part of this philosophy from here and now comes from the Eastern part of the world, and we know that Celibidache himself was strongly influenced by this world as well; he built some sort of personal faith, a fusion between the Eastern and Western beliefs. In this context, I was wondering to what extent is this aspect important to you - maybe you studied and/or practiced techniques that come from countries such as India, Nepal, Tibet or China, for example?

J.M: Yes, indeed, I have been practicing yoga and meditation and I studied Hindu philosophy, which talks about unity as a result of multiplicity. This idea is very close to that of the phenomenology. That is, we have a multitude of languages, yet the objective is the same.

Going back to your concert from Ploiești - you will be conducting creations by Schumann, Beethoven and Şostakovici. At a first glance, these three opposites aren't linked to one another. Is there, although, an idea that makes them come together, which brings cohesion to the evening?

J.M: Yes, indeed. The Manfred Ouverture is one of the most beautiful creations of Schumann's, inspired by a poem of Lord Byron; there are a multitude of parts, scenes, but we will only be performing the Ouverture. The orchestra from Ploiești has never sang this part before (a significant aspect). And this Overture's dramatism matches the one from the Symphony No. 5 of Şostakovici, one of the best creations of the XX century, considered by many as one of the best symphonies of the Russian author. It was composed in 1937, in a very difficult moment for Şostakovici, when his life was in danger. Then, he wrote this symphony, which was well-received by the public and the party, becoming a turning point for the artist. There are some moments in here that exude an incredible dramatism, especially towards the slow movement. Then we have Beethoven, a part that is complementary to the other two, a solar music, optimistic, full of life, open. It is a very difficult and long program, but very balanced, if we look at it as a whole. The opposites are not just placed one after the other, devoid of any logic. There is a relation between them.

The Soloist for the nr. 5 Concert for the piano and the orchestra by Beethoven is the young man Leonard Mihale, still a teenager. What is your approach in cases like these, when you are collaborating with very young interpreters, who sing very soliciting parts?

J.M: The first thing that I do is asking whether the young musician is a good one. And I have been told that Leonard is a fantastic pianist. I already know that there are many youngsters in Romania that are very talented. Thus, I haven't listened to him yet, but I trusted what I had been told. Naturally, we will meet each other and we will discuss the part, right before the first rehearsal with the orchestra. I will do my best to help him however I can, with all that comes down to my experience. Especially since the interpretation of the"Emperor Concerto" by a young pianist is… quite something! But I trust the situation and we will be working on this for a few hours before the rehearsal.

What are your expectations regarding the concert at the Philharmonic from Ploiești?

J.M: I have been told many beautiful things about the orchestra, and I already know some of the musicians, since I had conducted the Philharmonic from Beirut a long time, and the concert-maestro was the same one as the one from here. I have the feeling and the utmost certainty that we will be making beautiful things together.