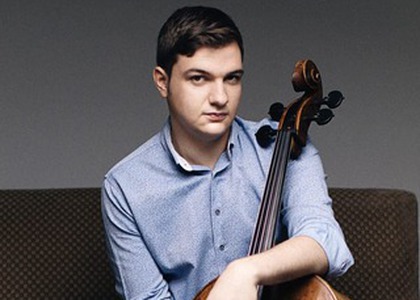 Wednesday, 18th of January, The Radio Chamber Orchestra will perform the first concert of this year. The event will have as a main character the violinist Andrei Ioniță, who will perform in a double soloist stance, playing both the piano and the cello. We find more details from the young violinist during an interview with Ioana Țintea.

Andrei Ioniță, Wednesday, 18th of January, on the stage of the Radio Hall, you will perform in a double soloist stance, at the piano and the cell0. What exactly made you choose the piano too as a tool of musical expression?

The piano is the first intrument I was interested in when I was a kid, in the third grade I also started to play the cello. However, the piano has always remained a passion and I could say even an unfulfilled dream and I continued to play, to study piano, and during the pandemic, I finally had the time to study seriously the piano. I already had a collab with the Orchestra of The Philharmonic from Brașov in 2021, with the same repertoire and I am beyond grateful to The Radio Chamber Orchestra for inviting me to repeat this concert in a double stance, on Wednesday, 18th of January.

You've mentioned about your debut at the piano on the stage of the Philharmonic from Brașov. How did your perspective changed meanwhile?

I hope I gained an overall view upon the play. It is an extraordinary combination of Mozart's music between the ranges and some brilliant excerpts in which you have to enter completely and, at the same time, the phrases built in a brilliant way, long phrases which create a formal picture, harmonic, absolutely out of common. Also, it is a concert of a great deepness, not only the second part that is famous in F sharp minor, but also the other parts, especially the first one. It is a music both intimate and exuberant. I remember the first time I have ever listened to this concert that I was deeply impressed and I said I have to perform it myself.

Emotionally, is your experience as a soloist different when you perform a play at the piano?

Clearly and fortunately my experience on the stage that I have gained during the years playing the cello made a difference. First of all, the size of the instrument is completely different, you have to control an even bigger tool of expression, to use a different technique of your arm, fingers, but, at the same time, it was a challenge and great pleasure to deepen the study of this instrument, which had offered music the richest and the most wonderful repertoire.

Regarding the preparation for this music sheet, have you had the guidance of a teacher were it was more about you being self-taught?

I listened to my friends' advices and of some teachers. I cannot say bow that I had a routine in preparing with a teacher, but I am grateful to all for their support, for the rehearsal with the piano reduction two.

I wished to choose a concert belonging to the classic Viennese repertoire. What a better choice than the Concert for cello in C major by Joseph Haydn, a work filled with virtuosity, a work loved both by the cello players and the audience.

With what thought do you expect the collaboration with the conductor Johann Stuckenbruck?

This is our first collaboration. I have already spoken with the musicians from the orchestra. They I very excited for the collaboration with him and I can't look forward to meet and give birth to special sounds on stage.

What is next in your agenda after the concert on 18th of January?

I am going to have some more recitals in Germany and England, in London, a recital asked by BBC Radio 3, after which I will be back in our country, in Timișoara, to start my residence in 2023 at the Philharmonic from there, given the fact that the city has a the status of being an European Capital of Culture. We are waiting for you.