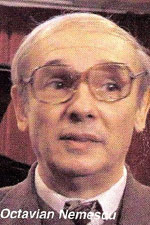 Octavian Nemescu at his 70th anniversary

Composer and professor Octavian Nemescu turned 70 on March 29th, 2010. An anniversary concert dedicated to this event took place on Tuesday, March 30th, 2010 at the Opera Hall of the National University of Music. You can further read on the works included in the programme and the directions followed in his composition creation.

Happy birthday, Maestro Octavian Nemescu! What are the thoughts that come to mind when at one's 70th anniversary?

I would like to finish all artistic projects I have started, I am working at the 24 hours cycle, that is the 24 hours music. I still have a few things to accomplish and then I think I will finish one cycle, part of my work upon the subject.

Which are the main directions of your creation?

I wanted to create an universal music, that goes beyond the limits of language, the spatial and temporal limits. The very archetypal direction I trained myself since youth, together with other collegues of mine, like Corneliu Dan Georgescu or Ştefan Niculescu, means in fact this searching for the universal language. This would be a first desideratum, to break the limits of the language of an epoch and those of the geographical space.

Then, also related to this ideea, I have always wanted to find a sort of music that is the so-called metha-stylism, a style above all styles, that comments upon other styles.

And, finally, perhaps lately I became preoccupied with the existence and the rediscussing of an initiation music, also in musical practice, in order to refind such origins, some principles that were at the basis of all musics, since the archaic period. I have noticed lately that in fact all archaic cultures were based on the ideea of initiation. So, the fact that all people are equal is not a democratical idea, but that there are some who know certain secrets of the Universe.

These initiated people were highly respected in that epoch. The danger of the modern epoch, starting from the French Revolution is this leveling, this counter-elite attitude. People who know some places, the more elevated souls, are in danger to be crushed by the masses. The myth of becoming a rhino - Eugen Ionescu raised this issue in one of his works: the mass who crushes the elite. My problem, probably shared by others too, not many, is to find this elevated language and not let art descend in the region of the kitsch, - today's great danger of democratization.

What can you tell us about the anniversary concert on March 30th 2010?

It includes three works, it is an initiative of Mister Liviu Dănceanu and the Archaeus ensemble, of Doina Rotaru and Dan Dediu, Rector of the University of Music, to whom I am grateful. Three works approach the prior issues. One is Beitsonorum, a musical piece for 6 o'clock in the morning, the second is Trison and discusses the idea of Divine Trinity, a work written in 1987, when I was in Lyon. This town was the place where Nostradamus made all kinds of prophecies and the music carries these prophetic, apocalyptical ideas. The third play is Finalis septima - it is about the obssesion I had, especially for a while, to discover the archetype of the beginning and the end of time. Put into music - the incipit and the finalis. It is about 7 final cadences in dialogue with the absence to reference to time, with infinity, with eternity.