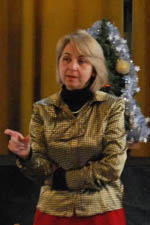 Saturday, 13 February 2010 , ora 13.53
Saturday February 13th 2010 a new season begins, organized by George Enescu National Museum in Busteni. On this occasion, we have interviewed Ms. Laura Manolache, the manager of the institution.


The season at ’George Enescu’ National Museum in Busteni starts, unlike other times, in February and ends in November. Why have you chosen to structure it like that?

During the summer, we receive numerous visitors and we wished that our annual season that included this period, too.


What do you consider will be the most important moments of the season?

We start with an event – a Chopin evening – due to the commemoration of 200 years from the composer’s birth, event supported by the Polish Institute. The performance will include a few transcriptions by Sorin Petrescu especially written for the following trio: on the piano, Sorin Petrescu, on oboe, Laurentiu Baciu and Cosmin Bălean on the bassoon. This event will be followed by a chamber music evening Remember Enescu, a piano piece for four hands, performed by Corina Răducanu and Eugen Dumitrescu. Cristina Radu, the soprano , is invited to perform with them.

Every week The Enescu Museum has scheduled a variety of concerts and interesting programmes; for example, the third and last recital in February, a bassoon quartette, with members from George Enescu Philharmonic Orchestra : theAcolade ensemble . We will present monthly a concert in which little performers – pianists, violinists and instrumentalists, will be accompanied by this ensemble of bassoons and will perform transcriptions, especially created for these programmes.
Larisa Clempuş
Translated by Monica Cristina Ţone, Andreea Velicu
MA students, MTTLC, Bucharest University
Return to archived Interviews