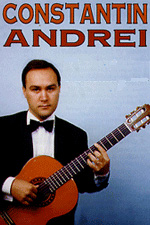 Monday, 23 August 2010 , ora 16.10
Between August 16th-21st, 2010, a new edition of the Transylvania Festival will take place in Cluj-Napoca. There will be two contests, apart from recitals and master-class courses run by Romanian and foreign guitar players; one of them is for guitar solo and the other one is for chamber music. We have received more information from the Artistic Manager of the Festival, guitar player and professor Constantin Andrei.


We are at the threshold of the 8th edition of the Transylvania Festival. How has this edition been improved in comparison to the previous years?


We hope that this year's edition will be even better, as we always do. The novelty is the medieval music recital performed by Duo Continuo from Hunedoara: Mircea Goian, viola da gamba and Nicolae Szekely, lute. A total of 20 chamber music groups have been enlisted in the Chamber Music Contest, most of them from countries such as Belgium, Germany, Spain, Poland and the Ukraine. This fills us with great joy because we can forsee that our festival will draw the expected attention with every performance.
Andreea Chiselev
Translated by Elena Daniela Radu and Andreea Velicu
MA students, MTTLC, Bucharest University
Return to archived Interviews